Find this article at:
go.ncsu.edu/readext?313486
— Written By Dominic Reisig

We are between flights right now (access the trap data and select “corn earworm” on the right), having experienced our major bollworm (aka corn earworm) flight during the first week of August. Most of the bollworms that we are finding in cotton and soybeans resulted from this flight. We can expect another flight within a few weeks. The general trend for this generation of earworms is that they show up and lay some eggs, but really never amount into much of anything. It would still be a good idea to scout any late-planted soybeans. Moths preferentially lay in tender beans, especially those that are flowering. 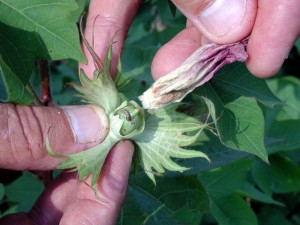 Most of our cotton in the state is WideStrike or Bollgard II, which produce two proteins that eliminate budworm and are very effective on bollworm. However, sometimes bollworm can develop on Bt cotton. Furthermore, sometimes actions taken earlier in the season (such as pyrethroid, Bidrin or Orthene sprays) knock out natural enemies and can flare worm populations. Bt protein expression varies with environmental conditions, variety, parts of the plant, and time. In general, the least Bt is expressed in squares and flowers. Sometimes bollworms can develop on these plant parts and infest bolls. This is why we have a threshold for bollworms in post-bloom Bt cotton, which is three live larvae per 100 terminals, squares, blooms or bolls.  We also recommend scouting for larvae underneath bloom tags, where they have developed on squares and blooms and can move into bolls.

If you’re scouting cotton, you should focus on the size of the larvae, note where they are located, and take into account the growth of the cotton. Our last effective bloom date for cotton is August 15, so don’t count on any more squares or blooms making it into harvestable bolls. However, recognize that larvae could develop on squares and blooms and move into larger bolls. At a certain point, bolls become too large for larvae to penetrate. If you have large-sized larvae (7+ days) either in bolls or present, your best time for control would have been when they were small (3-7 days). Your best bet will be to wait for these to cycle out since most the damage is done and you won’t kill larvae inside bolls.