Find this article at:
go.ncsu.edu/readext?403960
— Written By Guy Collins

Nematodes have become an increasingly important challenge in some fields since the loss of aldicarb a few years ago. However, our seed companies have helped combat this pest, through the release of some nematode tolerant or resistant varieties. Below is a list of varieties in which these companies have made claims to have nematode tolerance. There are several species of nematodes that adversely affect growth and yield of cotton, therefore it is important to note that these varieties only convey tolerance to root-knot nematodes. Due to the inconsistent and variable effects of nematodes and associated interactions with environmental influences on cotton yield, we generally recommend that growers evaluate yield potential of nematode-tolerant varieties regardless of the presence or absence of nematodes in variety trials. If nematodes are problematic in your fields, the company’s claims for tolerance could minimize the adverse effects of nematodes. However if nematodes aren’t as problematic as you would expect, choosing a high-yielding nematode-tolerant variety could still allow for high yields to be achieved . In other words, growers shouldn’t choose lower yielding varieties simply because they may have nematode tolerance. Therefore, when selecting varieties for nematode-problematic fields, growers should choose high-yielding varieties with nematode tolerance in case nematode pressure is lower than anticipated. Many of these root-knot nematode-tolerant varieties have appeared in trials over the past couple of years. As seen from the results of NCSU Official Variety Trials, which are conducted in environments with very low nematode pressure, there are some nematode tolerant varieties that are competitive with the more widely-planted varieties. The NC Cotton Variety Performance Calculator (https://trials.ces.ncsu.edu/cotton/) can be used to evaluate performance of these and other varieties. The calculator can also be found on the NCSU Cotton Portal Website (https://cotton.ces.ncsu.edu/).

Varieties Tolerant to Root-Knot Nematodes (as claimed by each company):

Velum Total is a relatively new in-furrow insecticide/nematicide product that contains imidacloprid (same active ingredient as found in Admire Pro) and fluopyram (a fungicide with nematicide properties). It is important to note that the concentration of imidacloprid in highest labeled rate of Velum is slightly less than that found in the highest labeled rate of Admire Pro, which is important to consider when combating thrips. It is also important to note that to date, there is very little replicated data in NC with regard to this product and its control of nematodes. With that said, there were a few on-farm trials conducted in 2015 that showed some promise with this product. Below are the results from two trials conducted in Northampton county during 2015. In both case, Velum at 16 oz/A was compared to Admire Pro at 9 oz/A (with regard to imidacloprid only, this rate of Velum was equivalent to roughly 7.5 oz/A of Admire Pro). These treatments were replicated at least 8 times in fields with very sandy soils and a history of nematode problems. In both cases, thrips pressure was relatively minor. As seen in the graphs below, seedcotton yields associated with Velum Total were statistically higher than that of Admire Pro at p<0.1. Research in Dr. Edmisten’s program during 2015, suggested that Velum may not result in positive yield responses in very low yielding environments and/or when nematode pressure is minor. Collectively, this is very limited data, which should be considered before widespread adoption, however this limited data does suggest that Velum may help combat nematodes in problematic fields. 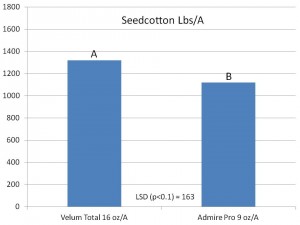 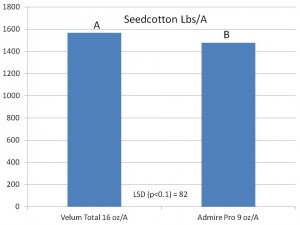