Find this article at:
go.ncsu.edu/readext?408540
— Written By Alan York and last updated by Guy Collins

Herbicide resistance in weeds is not a new phenomenon. However, as we continue to rely heavily on herbicides, we are continually exerting selection pressure for resistance. We have been promoting resistance management for years, and nearly all cotton growers are following at least some of the basic components of a resistance management strategy. It has been years since we saw a new herbicide mode of action come on the marketplace for any crop and especially cotton. Unfortunately, with the exception of dicamba in XtendFlex cotton and 2,4-D on Enlist cotton, we do not expect any new tools in the foreseeable future. Hence, we need to do what we can to discourage further selection for resistance to the herbicides we have. That is why we strongly promote mixtures of two or more PRE (preemergence) herbicides, residual herbicides mixed with the glyphosate or glufosinate applied POST (postemergence), and yes, directed layby residual herbicides. To the extent possible, we need to avoid overreliance on any single herbicide.

Of immediate concern is the PPO inhibitors. This mode of action includes the commonly used cotton herbicides flumioxazin (Valor, others) and fomesafen (Reflex, others). However, PPO inhibitors are widely used in our other crops, such as corn, soybean, tobacco, peanut, and sweet potato; see the below table PPO Inhibiting Herbicides for a listing of herbicides that contain a PPO inhibitor alone or mixed with another mode of action.

It is very likely that we have PPO-resistant common ragweed and Palmer amaranth in North Carolina. Some suspicious populations have been found, and Wes Everman and David Jordan are in the process of confirmation. Confirmation of resistance is a detailed and lengthy process.

For the immediate future, we are not suggesting major changes in programs for cotton. However, for growers applying Reflex (or a generic fomesafen) PRE, the threat of PPO resistance should encourage them to mix one or even two other herbicides with other modes of action with the Reflex.

Also, cotton growers need to be watching for any Palmer amaranth or common ragweed that appears to be missed by PPO inhibitors. If there are suspicious populations, let your county agent know as soon as you suspect a problem. And, if resistance is suspected, do whatever it takes to prevent those weeds from producing seed.

Our greatest immediate concern is for soybeans simply because of the reliance we place on PPO inhibitors in that crop. With widespread resistance in Palmer amaranth to glyphosate and ALS inhibitors, the only effective currently available POST options for Palmer amaranth in Roundup Ready soybeans are PPO inhibitors; Flexstar or some product containing fomesafen is most commonly used. Additionally, most of the PRE soybean herbicides also contain a PPO inhibitor (see table below).

Choices of PRE soybean herbicides that do not contain a PPO inhibitor are limited to Boundary, Dual Magnum, Outlook, Prowl, Treflan, Warrant, and Zidua. Boundary is a good option from the standpoint that it contains two herbicides with different modes of action (S-metolachlor and metribuzin). However, because of the metribuzin, growers must be careful to adjust the application rate to their specific soils. Also check with your seed representative to make sure the variety you are planting is not a metribuzin-sensitive variety. If one is going to use a PPO inhibitor PRE, then a herbicide with another mode of action should be tank-mixed with the PPO inhibitor or a premix product containing a PPO inhibitor plus another herbicide which is effective on pigweed species but has a different mode of action should be selected (see table below).

We use a lot of glufosinate (Liberty, others) in cotton and we are beginning to use more of it in soybeans. Whether or not we run into resistance with glufosinate remains to be seen. However, we are putting a lot of glufosinate selection pressure on our weeds, and resistance is not unexpected. In an effort to preserve the utility of Liberty, a glufosinate-based program should include a strong residual PRE herbicide(s) and a residual herbicide such as Dual Magnum, Outlook, or Warrant mixed with the glufosinate applied POST. Additionally, weed size is critical with glufosinate. Palmer amaranth should be at most 3 inches tall when treated. Remember it can grow an inch a day. Treating weeds beyond the appropriate growth stage is asking for trouble. Also, glufosinate acts as a contact herbicide, hence good spray coverage is important. Large droplets and low spray volumes are not conducive to good control with glufosinate. 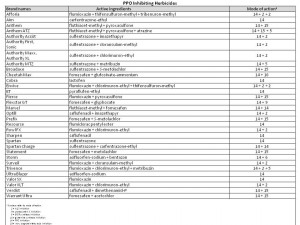