Find this article at:
go.ncsu.edu/readext?474997
— Written By NC State Extension

Glyphosate is registered for weed control at 1 pint/acre on dormant bermudagrass. Application of glyphosate in winter is highly efficacious if applied during warm winter days (great than 60 degrees). On warm days, glyphosate uptake is greater due to more easy penetration of the herbicide via the waxy leaf cuticle. In addition, glyphosate efficacy is enhanced when applied a low spray volumes (less than 50 gpa, but 20 to 30 gpa is preferred).

There have been many days this winter where daytime temperatures have been favorable for glyphosate application. In fact, that is just the problem. The warm and sunny days have resulted in premature green-up of bermudagrass. Hence, the most common question I have received this winter: “how much damage can I expect from glyphosate application on slightly greened-up bermudagrass?”

The chart below follows green-up following various glyphostate rates applied to 15% green bermudagrass. Ratings were recorded at 9 DAT (days after treatment) and 24 DAT. Note that at 9 DAT rating, the nontreated bermuagrass was already 50% greened-up whereas 1 pt/a of glyphosate was 18%. By 24 DAT, bermudagrass was 65% greened up with 1 pt/a of glyphosate whereas the nontreated was 80% greened-up. 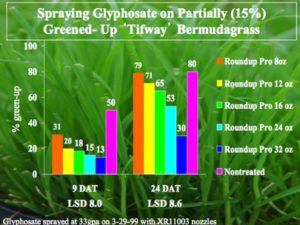 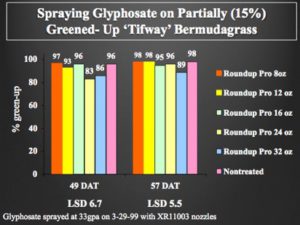