Find this article at:
go.ncsu.edu/readext?475088
— Written By Dominic Reisig

So far plant bug activity has been normal to a bit on the low side. With more cotton starting to square, ALL cotton in the state should be scouted so that we maintain acceptable square load to bring us into blooming (see this previous article for how to scout and use thresholds for plant bugs prebloom).

Prior to bloom, we recommend an insecticide in the neonicotinoid-class. These include products such as Admire Pro, Belay, Centric, Trimax Pro, etc. The advantage to using these products is that they generally do not flare secondary pests, such as spider mites, and may preserve some, but not all, beneficial insects. In general, a product that is killing a plant bug will likely kill related beneficial insects such as minute pirate bug and insidious flower bug, damsel bugs, assassin bugs, and big-eyed bugs. However, these products are still much less harsh on the system than pyrethroid and organophosphate-class insecticides. Don’t forget that an apparent “spray failure” early season could be a situation where you are chasing adults. That is to say that adults could have re-invaded into the field after spray, making it look poor, when in fact it worked. Check sprays as soon as it’s safe to enter the field.

Most folks have been choosing Admire Pro as a first insecticide, but our data do not support the efficacy of this insecticide over Belay or Centric. In my screening trials, Admire has always looked as good as other alternatives or, in other cases, worse. Furthermore, in a recent trial in South Carolina alfalfa, Admire was especially weak on plant bug nymphs. Finally, using an insecticide that exceeds the labeled rate is not only illegal, but it increases resistance in the target pest and non-target pests (we already have populations of neonicotinoid-resistant aphids). To be clear, our recommendation is Admire Pro, Belay or Centric as a first insecticide prior to blooming. 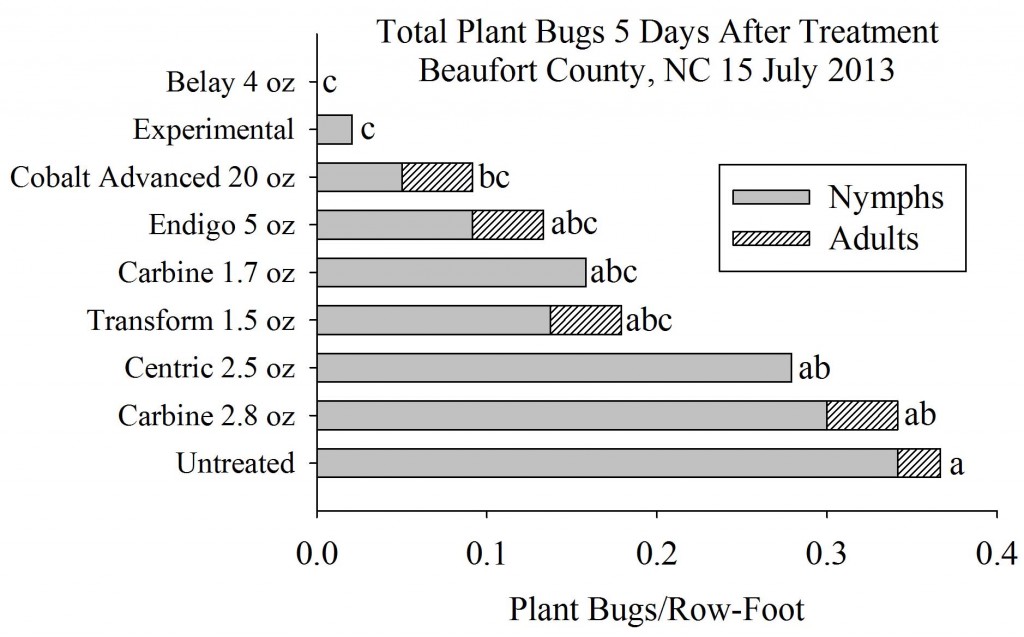 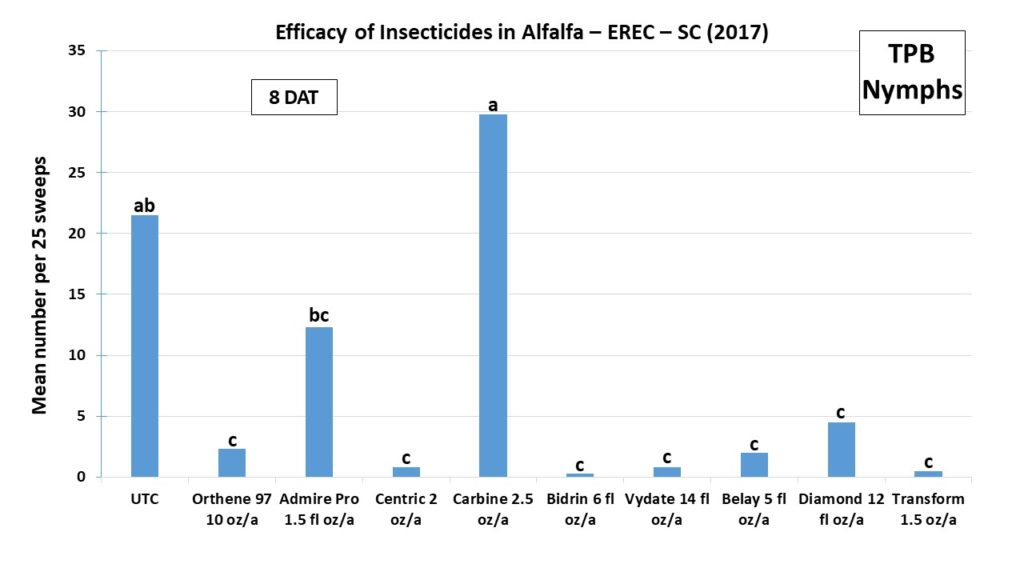 Later in the season, neonicotinoid efficacy tends to fall off. Therefore, our recommendation is a pyrethroid. Some pyrethroids work better than others and we probably have some populations that are pyrethroid resistant (see graphs below). In a trial at Plymouth, NC last year, bifenthrin was no better than the untreated. If nymphs are present, you should consider mixing in Diamond at 4-6 oz. Diamond is an insect growth regulator and only active on immatures, so it needs to be paired with an insecticide for knock down of adults (pyrethroid or Orthene). Data from the Midsouth shows that it can extend the time that they have to make their next spray and is worth the investment. In areas that are pyrethroid resistant, mix Orthene with Diamond. 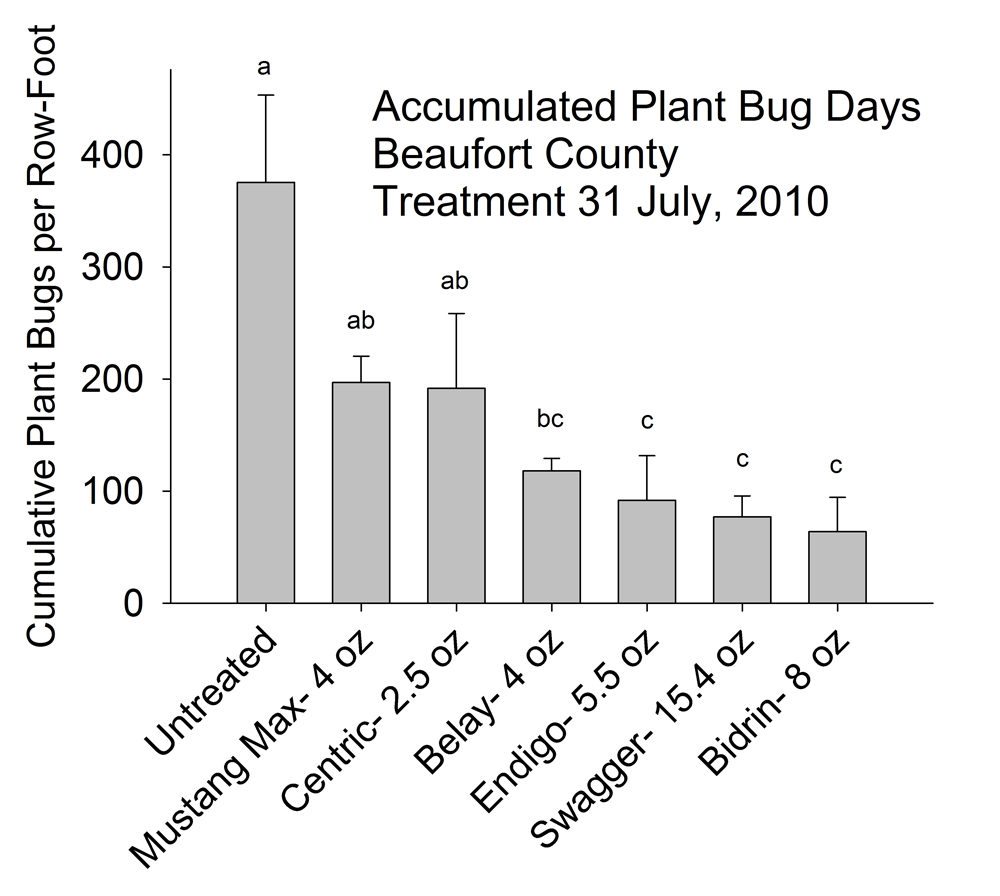 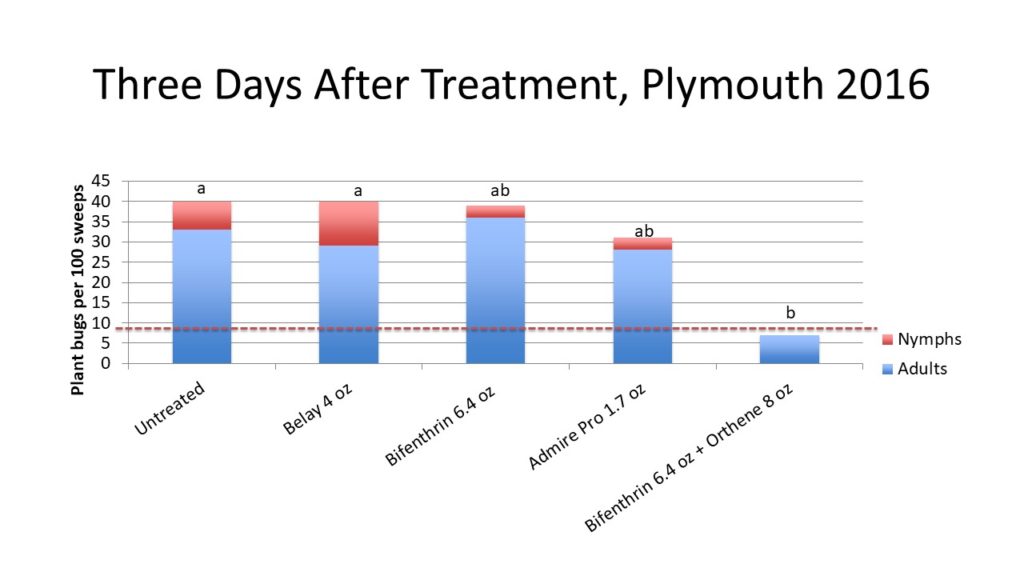 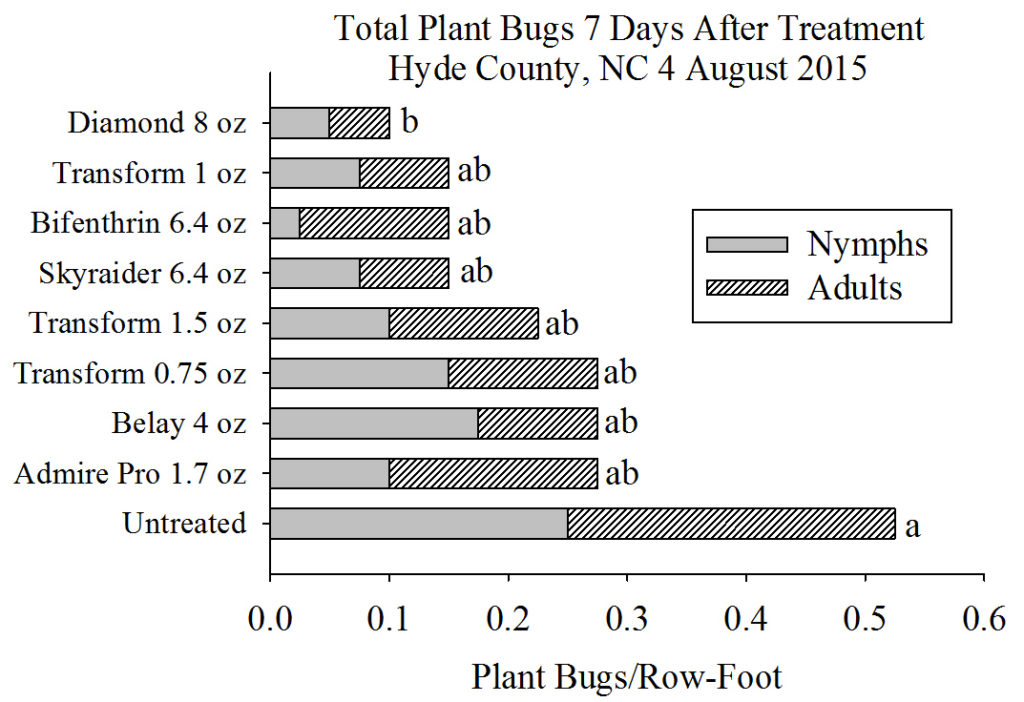 Additional treatments after two shots will hopefully fall into the blooming period, where stink bugs and plant bugs can be managed simultaneously (Bidrin is a hammer against both). This is the time to use mixtures (pyrethroid + Orthene) and be sure to rotate chemistries across insecticide classes.