Find this article at:
go.ncsu.edu/readext?535658
— Written By Charlie Cahoon

After walking a dicamba complaint last summer in Virginia, I could come to only one conclusion. It had to be a temperature inversion. The field in question was about 30 acres in size and sat in a depression surrounded by trees. The grower with injured soybeans was also a tobacco farmer and did not allow dicamba onto the farm. Nothing else sprayed with the same tank or later with the same sprayer displayed dicamba injury. To the west and southwest, up the hill, and across a small river were 125-150 acres of soybeans treated with dicamba. The only source of dicamba around. By process of elimination and given the distance and uniformity of symptomology I concluded it had to be a temperature inversion. But for some reason it was difficult for me to arrive at that conclusion.

First off let’s start with a refresher. Under normal conditions the sun heats the earth’s surface. Warm air by the surface rises and wind allows for mixing of warm air and the cooler air above it (temperature decreases with increasing altitude). A temperature inversion, as the name suggests, is the exact opposite. This is when temperature increases as altitude increases. This is often the case on clear, windless nights. In this situation, as the sun sets in the evening radiative cooling of the earth’s surface occurs. This coupled with a lack of wind to facilitate mixing cause a warm air layer to be trapped between cooler air near the surface and cold air at higher altitudes. This essentially creates a ceiling where smog, for example, can accumulate. Nocturnal temperature inversions are usually overcome by warming of the earth after sunrise or winds strong enough to cause turbulent mixing. 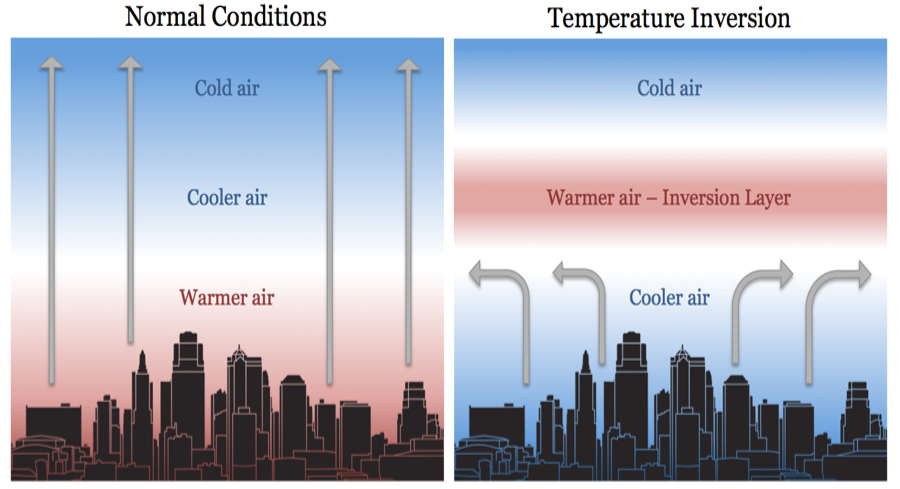 To demonstrate this concept (after procuring food coloring and mason jars from my mother-in-law’s kitchen) I used warm (red) water to simulate warm air and cool (blue) water to simulate cool air. In this first video I simulate normal conditions with warm water on bottom and cool water on top.

Did you notice how the warm water rushed upward? This is exactly like the convective mixing of air that occurs when we have some amount of wind. Warm water, like warm air rises, mixing easily with the cool water. Under these conditions, pesticides would easily dissipate.

To simulate a temperature inversion, I do the reverse. Cool water on bottom, warm on top.

What happened? No mixing at all. Where the warm and cool water meet is that ceiling I mentioned earlier. So what does this mean to a pesticide applicator? When a temperature inversion persists, pesticides (vapors or suspended spray particles) cannot dissipate as normal and they can accumulate at the ceiling created by the warm air. Then a slight wind (< 3 mph; not enough to kick-start air mixing) can move an entire plume of dicamba, like in my soybean example above, onto your neighbor’s sensitive crop.

So how can we avoid spraying into a temperature inversion? Here are few things to watch for:
1) No or very slight wind (< 3 mph)
2) Clear windless nights; research from the University of Missouri reported 24 and 20 (almost nightly) temperature inversions occurred in southeast Missouri during June 2016 and July 2016, respectively.
3) Visible dew
4) Low-lying fog
5) Horizontal smoke patterns

Keep in mind, if there is no wind (or light winds), although the chances of spray drift are less, off-target movement via temperature inversions remains a serious threat. Remember all that you learned from the “Auxin Herbicides-Best Management Practices” training, provided by NC State Cooperative Extension and NCDACS, to keep all pesticides on-target.