Find this article at:
go.ncsu.edu/readext?548571
— Written By Guy Collins

It’s still early in the game, but some growers are entertaining the idea of defoliating some early planted cotton over the next couple of weeks. The 2018 crop appears to be more variable than this time last year, depending on planting date, intensity of drought stress during late June or early July, and rainfall during the latter half of the bloom period. In many areas, there is still high yield potential but it can vary within a close proximity. Regardless of the situation, we need a strong finish and clear fall weather to harvest this crop. Ideally, the fall would bring many sunny, warm days, and hopefully we can avoid prolonged cloudy, wet weather and especially tropical storms. Below are a few points to address some questions that we’ve received recently, as well as a few thoughts that should be considered throughout our defoliation period.

Juvenile growth / regrowth is young vegetative growth that occurs normally once the plant meets its boll demands and when warm temperatures prevail. Since it is small plant tissue, there isn’t a great demand for water, therefore even a little soil moisture can promote this new growth. Juvenile growth / regrowth can be categorized as terminal (top 4-5 nodes of the plant) or basal (lower nodes where this tissue arising from the axial buds, where branches meet the main stalk). Juvenile growth and regrowth are essentially the same tissue, but there is a small difference in terminology. Generally, this new young growth is called “juvenile growth” if it appears before defoliation occurs, but is called “regrowth” if it appears after defoliation but before harvest. Many factors (residual N, boll load, soil moisture, temperatures, sunlight) influence when and how much regrowth will occur, but it is safe to assume that regrowth will likely need to be addressed in most fields during the first half to 2/3rds of our defoliation window. Many gins can effectively remove some regrowth from harvested lint, however regrowth can increase moisture in modules to harmful levels, can discolor lint resulting in quality penalties, and can increase trash content. Needless to say, it is best to prevent regrowth from developing and minimize the amount that ends up in modules.

Products containing TDZ (4 lbs a.i. per gallon of thidiazuron) such as Dropp, FreeFall, other generics, are best equipped to remove juvenile growth and prevent regrowth. TDZ is not generally used as a standalone defoliant, but can contribute to overall defoliation as well as effectively removing juvenile growth or preventing regrowth. Generally, these products are tankmixed in a three-way mixure of Folex/Ethephon/TDZ or Finish/TDZ or Folex/Finish/TDZ. TDZ is very temperature sensitive and is more active during warmer temperatures, hence it is more commonly used during the early part of our defoliation window. Depending on temperatures and the rates of other tankmixture partners, the 3.2 oz/A rate of TDZ generally best addresses regrowth problems.

We have heard several rumors that the supply of TDZ may be very short this year. We hear these types of rumors every year about various products, but this seems to be a common thread this year. It may be limited for the time being, however, these products are effective products when tankmixed properly, and they are affordable, so it is worth the time to try to source some TDZ and make some effort to secure some TDZ for your farm at various times throughout our defoliation season. If you cannot secure TDZ, another option for effective overall defoliation AND regrowth management is a TDZ+diuron product (Ginstar, Adios, CutOut, other generics that contain 1 lb a.i./gal of TDZ plus 0.5 lb a.i./gal of diuron) applied at 8 to 10 oz/A tankmixed with ethephon (6 lb a.i./gal) during periods of warm temperatures, or Finish/Terminate/other generics during periods cooler temperatures. Use the 8 oz/A rate of TDZ+diuron when temperatures are warm (daily highs in the mid to upper 80’s, nighttime lows in the 60’s) and move towards the 10 oz/A rate as daily highs move towards the 70’s with lows in the 50’s or less. Just as a note of caution, TDZ+diuron can desiccate leaves (juvenile growth and older leaves) when daily highs reach the 90’s, especially with high humidity. It is probably best that these products be used when daily highs are in the 80’s, but if you have to defoliate when temperatures are in the 90’s, use the 6.4 oz/A rate with ethephon. This rate may help avoid desiccation but may also result in suboptimal defoliation. Replacing ethephon with a moderate rate of Finish/Terminate may help improve defoliation in these situations, but again, it is best to wait on more moderate temperatures versus defoliating in hot (90’s) and humid conditions.

Another way to minimize regrowth at harvest, is to harvest cotton in a timely manner. This is standard advice for nearly any situation, other than waiting on a large number of bolls to open during periods of cool weather. It is always good to remember that fiber quality will be the best for any given boll on the day that boll opens….thereafter, quality can, at best, be similar if nearly perfect weather continues, or degrade the longer it is exposed to the elements. The latter scenario is more common for us in the Southeast. We encourage growers to defoliate when cotton is mature and safe for defoliation and harvest within 14 days of defoliation. We also advise growers to only defoliate the acres that they are nearly certain can be harvested within 14 days. It does no good to defoliate and let cotton sit for a prolonged period of time, exposing opened bolls to continued weathering. Additionally, regrowth can develop exponentially over time. When we defoliate cotton and remove the older leaves, sunlight can then reach the axial buds and therefore promote regrowth to initiate and grow rapidly, especially if there is even a little soil moisture during that time. Even when using the best control tactics for regrowth prevention (TDZ or TDZ+diuron), we often see performance drastically decline once we reach 14 days after defoliation, and regrowth grows very rapidly at that point.

For best performance for any defoliation strategy, pay very close attention to the weather conditions on the day you intend to defoliate, and the day or two following. Generally, when we receive calls about poor defoliation, the most common factors by far are application volume (which we’ll address later in this article) and weather on the day of defoliation and soon thereafter. Constant cloudy weather on the day of defoliation and a day or two after consistently results in poor defoliation. Ideally, defoliate when daily highs are in the 80’s (at least for early season defoliation) and sunny conditions are expected throughout the remainder of that day and the following day. Additionally, if rains are expected and you have the option, it is best to wait until the rain passes. TDZ products require a lengthy rain-free period (24 hours) so it is generally wise to wait for dry conditions before defoliating.

We are not at all worried about cool weather just yet, but we do have a noticeable amount of later planted cotton again this year. Rainfall patterns have generally rewarded later planted cotton this year, therefore some late planted fields may have relatively high yield potential. Defoliation of later planted cotton could easily coincide with cooler weather this year, which has yet to be determined. In you have a significant number of harvestable bolls to open when cool weather sets in, there are a few options that can help promote or accelerate boll opening. First, a grower could defoliate using a standard three or four-way tank mixture and use the maximum rate of ethephon (2.66 pints/A). Growers could also adjust rates of tankmixture partners or even replace some products with Finish/Terminate which is a little more active for opening bolls during cooler weather. Lastly, using CottonQuik/FirstPick can be very effective at opening bolls when very cool to cold temperatures set in.

Attempting to open bolls during periods of cool weather is challenging and tricky. Success is dependent on prevailing temperatures and maturity of harvestable bolls as well. During cool weather, boll development and maturation can slow significantly, therefore it helps to evaluate how much these bolls will contribute to harvested yield. A grower should not wait indefinitely or even for a long time if the unopened bolls will only contribute a small amount to yield. However, a grower could wait a little longer on later planted cotton if moderate temperatures prevail, especially in sunny conditions, if unopened bolls WILL contribute significantly to yield. Generally speaking, it requires significantly more time for bolls to open once we reach mid October. This, along with slower development of regrowth beyond this point, therefore reduce the advantages to delaying defoliation. Regardless, growers should attempt to open bolls BEFORE a frost occurs, as a frost could compromise some harvestable bolls that won’t open in time.

IF there are some later planted fields with a significant number of unopened harvestable bolls and a frost is forecasted, it is generally best to defoliate at least 2 to 3 days ahead of the frost. Growers should use the maximum amount of ethephon in a tankmixture, or use Finish/Terminate or CottonQuik/FirstPick which are more active in opening bolls during periods of cooler weather, as mentioned above. If fields have already been defoliated and there are still some bolls that have yet to open, 8 oz/A of paraquat (3 lb a.i. per gallon) can stimulate some bolls to open by drying out some carpal walls, assuming the bolls are mature but haven’t quite opened. If the maximum amount of ethephon was not used during the initial defoliation, including the remaining allowable amount tankmixed with paraquat could also aid in boll opening.

The role of application volume and nozzles in defoliation success: 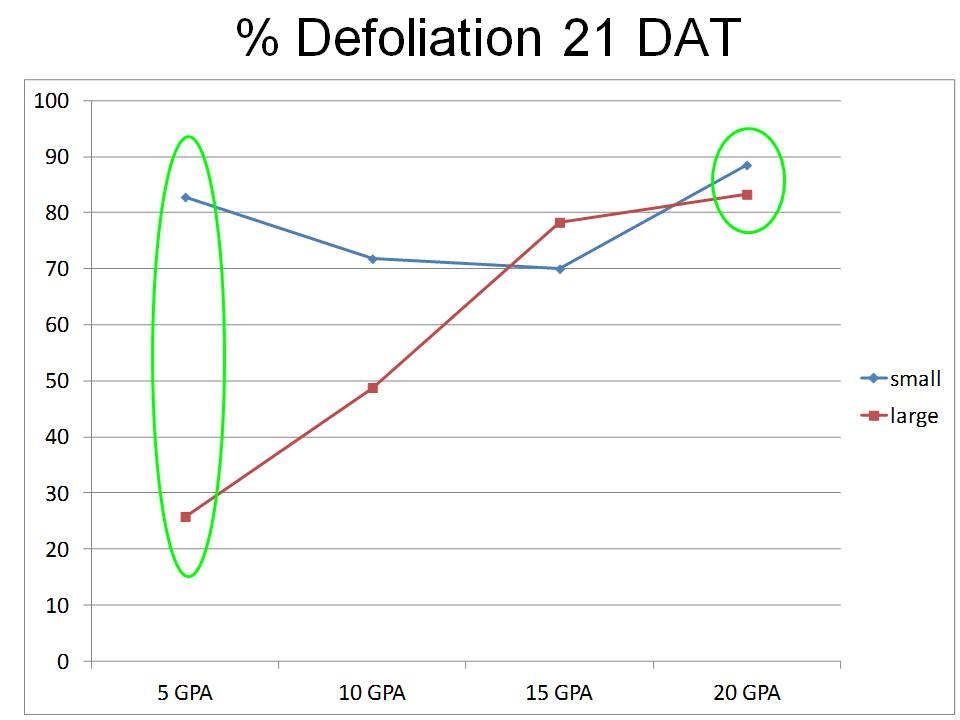 I sincerely hope that we don’t need to even worry about this, but it wouldn’t hurt to revisit an article that we released last year which discusses this thoroughly. See the article for defoliation strategies regarding various scenarios with potential storms.