Find this article at:
go.ncsu.edu/readext?738322
— Written By Guy Collins

This is an update to the newsletter article we released last Friday, September 25, 2020, which now includes heat unit accumulation since that date and a new forecast through October 14. In places, temperatures have slightly improved from last week’s forecast, however not by enough to have any meaningful effect on upper boll development.

The intention of this article is to provide information so that defoliation timing decisions can be made, not to tell growers when they should or should not defoliate. We are in somewhat of a lose/lose situation with a crop that is not mature enough for defoliation, but also, little incentive to delay defoliation much further. In a normal year, we would still be gaining strides with boll maturity with some degree of heat unit accumulation. However, this year, September has experienced multiple cool periods, and the outlook doesn’t suggest many more heat units will accumulate by mid-October. Tomorrow is the last day to accumulate any meaningful heat units that will contribute to boll maturity for a while. As is always the case, there are two ways this information will be incorrect, and we hope that it is. One way is that the current 2-week weather forecast is incorrect and temperatures will be warmer than forecasted. That has occurred somewhat since our last article, albeit minimally. The second way this information might be incorrect is that weather beyond the current 2-week forecast drastically improves and we experience noticeably warmer temperatures throughout most of October. The tables below illustrate the heat units accumulated and forecasted since several hypothetical last effective bloom dates through October 14, as well as the days elapsed for several places within our cotton production region. 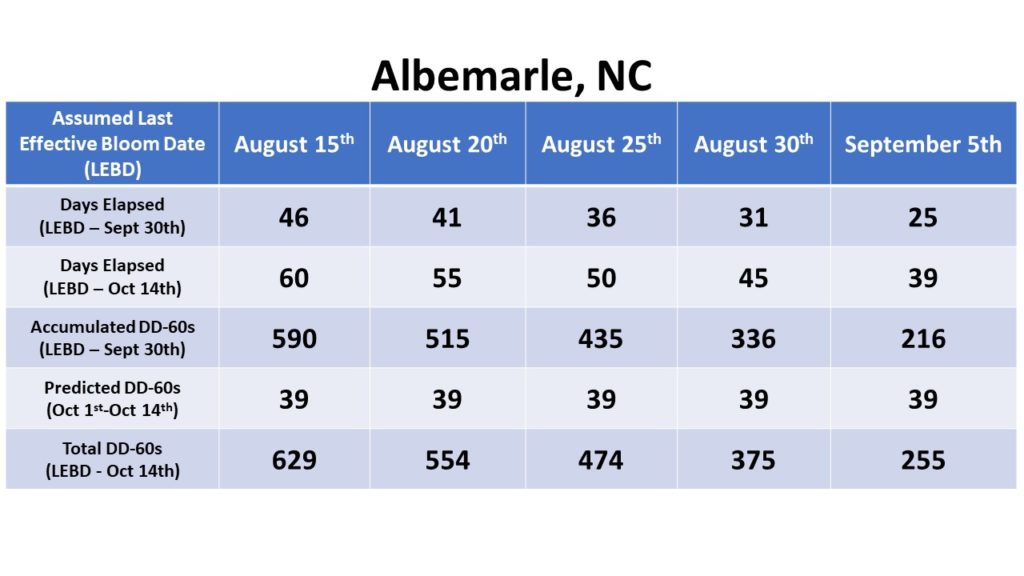 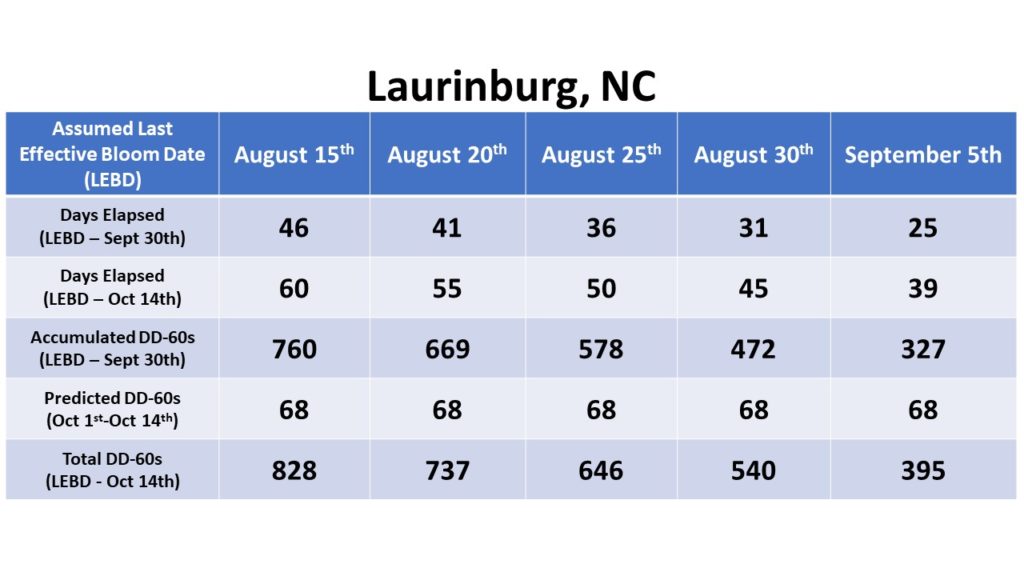 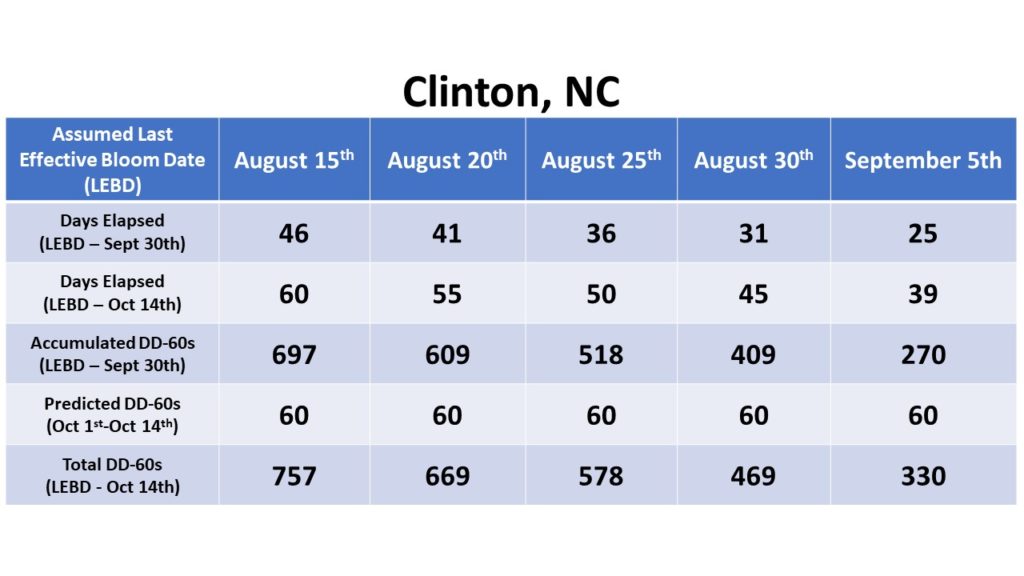 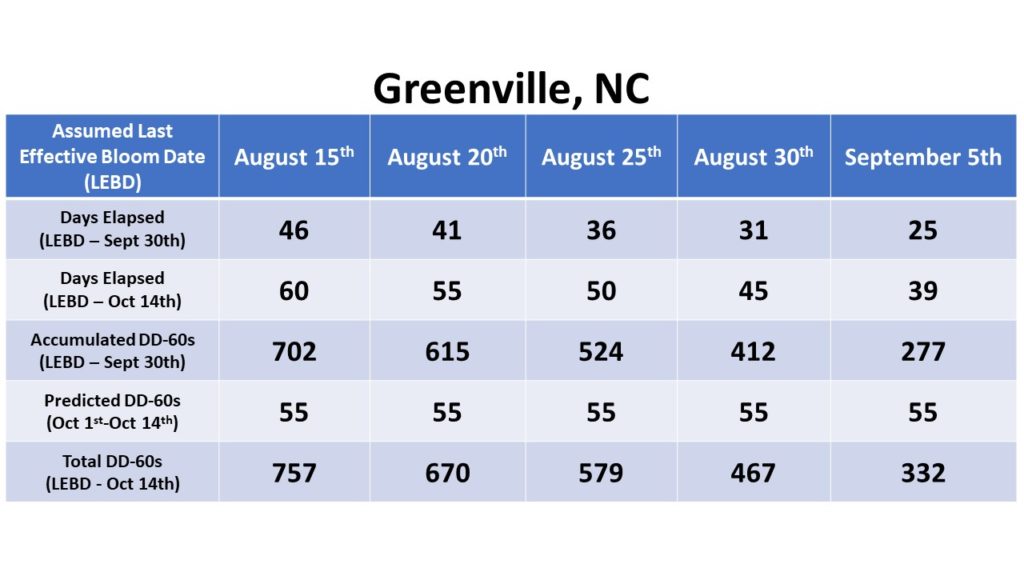 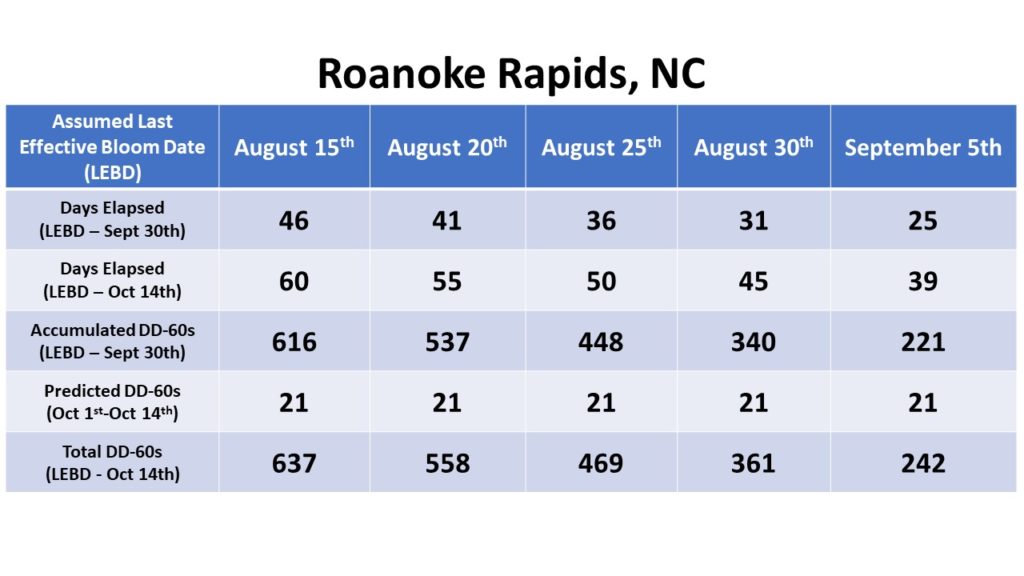 If you remember from our first article, it is generally accepted that bolls require 50 to 60 days to mature, from the day of blooming to cracked boll. The 10-day difference in this range exists because upper bolls often encounter lower temperatures during the latter part of their development, thereby requiring more time to develop. The 50-60 day range is based on normal average heat unit accumulation. Although it’s not an exact science, nor an excellent predictor of when bolls might reach maturity and open, it is generally accepted that bolls require somewhere between 800 to 1200 DD-60’s from the day of bloom to cracked boll. The wide range is due to other factors that may affect boll development in addition to heat unit accumulation, such as soil moisture or lack thereof, cloudy, damp conditions, etc. For the sake of optimism and argument, let’s assume that we can achieve boll maturity with 800 heat units. When observing these tables, you can see that we will be getting close on days required for boll maturity for our very earliest last effective bloom dates. However, we are noticeably behind on heat unit accumulation, as we’ve experienced a cooler-than-normal September with several periods of multi-day rainy spells, and now, many parts of the state are likely to experience a 3- to 5-day cool spell which will bring little to no (sometimes negative) heat units until mid/late next week. Beyond this cool period, heat unit accumulation is forecasted to be low, therefore any meaningful gains in boll maturity will be very, very slow, if any, for quite a while. Keep in mind that a daily high/low-temperature range of 70/50 provides no DD-60’s. For any meaningful progress to occur in boll maturation, the daily high/lows need to be 75/55 or above, but ideally 80/60 or above to observe much progress. The ideal temperatures needed for meaningful progress towards boll maturity are currently not forecasted for most places in our state.

Even with this updated forecast, waiting longer for bolls to mature is, unfortunately, futile and unlikely, or will be very slow at best. Hypothetically, progress towards maturity that would normally occur in a week’s time during late September or early October in most years, will now take 2-3 weeks, assuming we even have a chance at maturing these bolls. The areas that perhaps caught a rain during the latter half of July and have a relatively normal fruiting pattern, without a distinct break or gap in boll maturity, are most likely to benefit by waiting a little bit to defoliate. Even so, our southern-most counties are most likely to see progress in boll maturity by waiting a little while, but only for our earliest last effective bloom dates. For areas that experienced a severe and prolonged drought in July likely now have a mature bottom crop and a noticeably less mature top crop. Depending on maturity of those top bolls, some may be too far away from maturity to gain much by waiting. It will be very important to slice open these upper bolls to determine how mature they are. Therefore, growers are faced with a decision to 1. Defoliate now while we have a day or two left of some heat to hopefully achieve more activity from our boll opening materials, or 2. Wait it out in hopes of maturing more top bolls. Neither are ideal. Defoliating now may prevent some top bolls from opening. Delaying defoliation risks losing the currently open bolls to weathering, or even losing some that may crack in the next week or two. Defoliating now will help open and preserve bolls that are mature (or very close to maturity) at this time, securing yield potential that we currently have. Delaying defoliation may help capture more yield from immature bolls, but this scenario will require very little weathering in the coming weeks, and a major improvement in temperatures in the next 2 weeks and beyond. At this point, the best advice we can offer, which is solely based on the current weather forecast, is to focus some defoliation efforts on your most mature fields that you will harvest first. Remember, we always advise producers to defoliate only the number of acres that can effectively and reasonably be harvested 2 weeks later. It does no good to defoliate your entire crop when the majority of it will not be harvested until 3 to 4 weeks later. Growers may decide to halt defoliation beginning this Friday until this weekend’s cool spell passes and resume defoliation sometime mid/late next week.
When defoliating, growers should consider using a high rate of ethephon in their tank mixtures. The highest rate allowed is 2.67 pints/A of 6 lb a.i./gal ethephon material in any form. Growers may also want to consider using products like Finish or Terminate (ethephon + cyclanilide) which is more active in cooler temperatures and more effective at opening bolls than ethephon alone in cooler weather. Although it is not used as much as it once was, CottonQuik or FirstPick (ethephon + urea sulfate) is also very active in cooler temperatures and more effective at opening bolls in less than ideal conditions. As a sidenote, products containing thidiazuron+diuron (Ginstar/Adios/CutOut, others) will likely be needed in addition to Finish or Ethephon to achieve ideal defoliation and regrowth control during cooler weather, as opposed to thidiazuron alone. In cases where growers have already defoliated, and most leaves have been removed but some upper bolls are hardened but still will not open, the use of paraquat can sometimes promote boll opening at that point. This should NOT be done in the first defoliation, but rather only when some bolls refuse to open following our best efforts to defoliate and open bolls with ethephon-containing materials and nearly all leaves have been removed. This strategy may or may not work, and will not further enhance boll maturity, but occasionally it can be effective at opening near-mature bolls that otherwise would not open on their own due to cooler weather. If this strategy is used, keep in mind that the application cannot be made within three days of harvest. With that said, desiccation is to be expected, therefore waiting longer than 4-5 days after application to harvest will likely increase the chances of desiccation, bark, or poor leaf grades, etc.