Find this article at:
go.ncsu.edu/readext?740082
— Written By Guy Collins and last updated by Keith Edmisten

This is an update to the newsletter article we released last Wednesday, September 30, 2020, which now includes heat unit accumulation since that date and a new forecast through October 19. In places, there has been a slight improvement in predicted heat unit accumulation for this week, which could influence grower decisions on which fields to defoliate next, as most growers have (and should have) already begun defoliating. Additionally, the long-term forecast suggests a noticeable cooling trend may be coming sometime around the weekend after next (October 15–16), and if that holds true, there will be no heat unit accumulation beyond that point and will also become very difficult to open bolls if defoliation is delayed until then. We will continue to monitor the weather forecast later this week and into next week to hopefully provide the best agronomic information possible for growers to make defoliation timing decisions.

The intention of this article is to provide information so that defoliation timing decisions can be made, not to tell growers when they should or should not defoliate. There is not an ideal strategy here, with a crop that is not mature enough for defoliation, but also, little incentive to delay defoliation much further. The following information is based on the plethora of phone calls we’ve received to date.

Growers are strongly encouraged to slice open bolls in every field to determine how mature the unopened bolls are. Many folks have made comments on percent open and nodes above cracked boll (NACB) status of some fields. Those methods have assumptions built into their recommendations, such as a normal fruiting pattern (fairly normal and steady development of bolls from the bottom of the plants to upper nodes and outer positions) AND that the closed bolls are mature enough to safely defoliate. It is not advised to assume unopened bolls are mature enough this year, nor rely on percent open bolls or NACB to make defoliation timing decisions. Therefore, the only way to know if unopened bolls are mature is to slice them open and observe maturity of lint and seed. Our hopes of opening bolls are rapidly diminishing at this point for bolls that are high in moisture with seed that are not well-formed. Bolls that are tough to slice, have a well-formed seed with distinct cotyledons inside them, even if they don’t have a dark seed coat yet, may have a chance. The best opportunity for heat units to help mature some younger bolls will be tomorrow through this coming weekend, with the majority of these heat units accumulating between now and Friday for most areas. Beyond that, maturity gains are doubtful and will be very slow at best. Cutting bolls should be done in every field, and it’s important to remember that upper boll maturity is VERY field-specific this year. You can have two fields that are both 40-50 percent open at this point, but the maturity of the unopened bolls may be very different between these two fields, due to conditions that occurred earlier in the year (severity and length of the July drought for example). The only way to know is to slice some bolls in every field and make field-specific decision regarding when they should be defoliated.

Also, it does no good to defoliate all your crop at one time when the majority of fields won’t be harvested for a month. Likewise, if you delay defoliation on your entire crop, you could run into a situation where rainfall doesn’t dry up quickly due to cooler weather, and effective harvest hours diminish in late October and into November, and harvest progress slows down dramatically. Additionally, cooler weather could be coming sooner than we think and sooner than normal, based on the long-term forecast. Therefore, we encourage folks to defoliate a little all along (starting now, if they haven’t already) while doing the best they can with boll opening materials (higher rates of Finish/Terminate, possibly spiked with additional ethephon). Focus efforts on the most mature fields where unopened bolls have the greatest chance of opening. Only defoliate the acres that can effectively be harvested two weeks later, and proceed steadily this way across your entire crop. This allows the best tradeoff for the least-mature fields that could gain a little maturity through the heat units offered this week versus capturing the benefit of higher defoliation activity on your most mature fields when applying boll openers while warm. It’s important to note that defoliating your most mature fields first and steadily progressing to your least mature fields MAY NOT follow the same order as planting date, or your normal route for harvesting order. In other words, we may have to skip around a little bit, simply because upper boll maturity is VERY field-specific this year. With that said, we hope that most growers have already starting defoliating and are proceeding with it now. We may be in a situation next week where we will have to take action on remaining acres.

Beyond Thursday or Friday of next week (October 15–16), there appears to be a cooling trend coming, with daily highs consistently in the 60s and lows in the 40s in many areas of the state. If this forecast holds true, it’ll be very difficult to defoliate and open bolls if we defoliate in those conditions. We will watch the long-term forecast for changes as we get to this weekend and into next week, however, if it continues to suggest cool weather for the weekend of October 15–16, we encourage growers to take action by early/mid next week on remaining acres in order to have the best chance of opening bolls.

The tables below illustrate the heat units accumulated and forecasted since several hypothetical last effective bloom dates through October 19, as well as the days elapsed for several places within our cotton production region. As mentioned in earlier newsletters, it is generally accepted that bolls require 50 to 60 days to mature, from the day of blooming to cracked boll. The 10-day difference in this range exists because upper bolls often encounter lower temperatures during the latter part of their development, thereby requiring more time to develop. As seen in the tables below, we’ll reach the 60 days required for our earliest Last Effective Bloom Date (August 15) by October 14, and our next earliest Last Effective Bloom Date of August 20 by October 19. However, the 50-60 day range is based on normal average heat unit accumulation. Although it’s not an exact science, nor an excellent predictor of when bolls might reach maturity and open, it is generally accepted that bolls require somewhere between 800 to 1200 DD-60’s from the day of bloom to cracked boll. The wide range is due to other factors that may affect boll development in addition to heat unit accumulation, such as soil moisture or lack thereof, cloudy, damp conditions, etc. For the sake of optimism and argument, let’s assume that we can achieve boll maturity with 800 heat units. When observing these tables, you can see that only the southern-most regions of the state will reach this level for the earliest couple of Last Effective Bloom Dates by October 19. Additionally, you can see that the very large majority of the predicted heat units will occur between now and this coming weekend, and nearly no accumulation occurring after October 14 for most areas. Needless to say, we continue to be behind on necessary heat units with not much promise for more beyond this weekend. Even so, there are very few days with daily highs/lows above 80/60 which are more impactful on further boll development. Again, if the forecast holds true, we will need to take action and defoliate the last remaining acres sometime early/mid next week, which is the last chance to try to open bolls in some decent temperatures. Consider proceeding with defoliating a few acres daily between now and then while focusing efforts on the most mature fields. 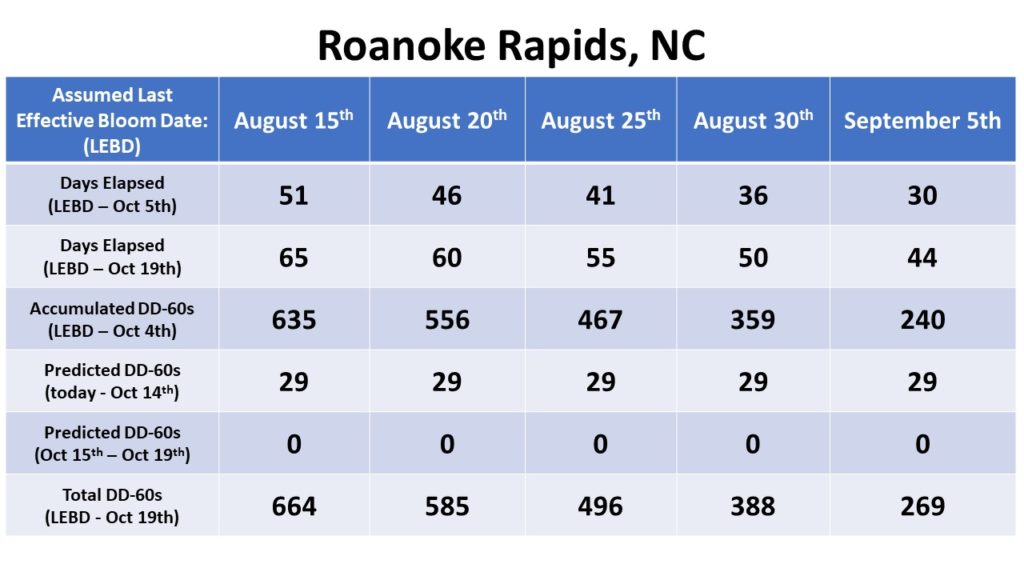 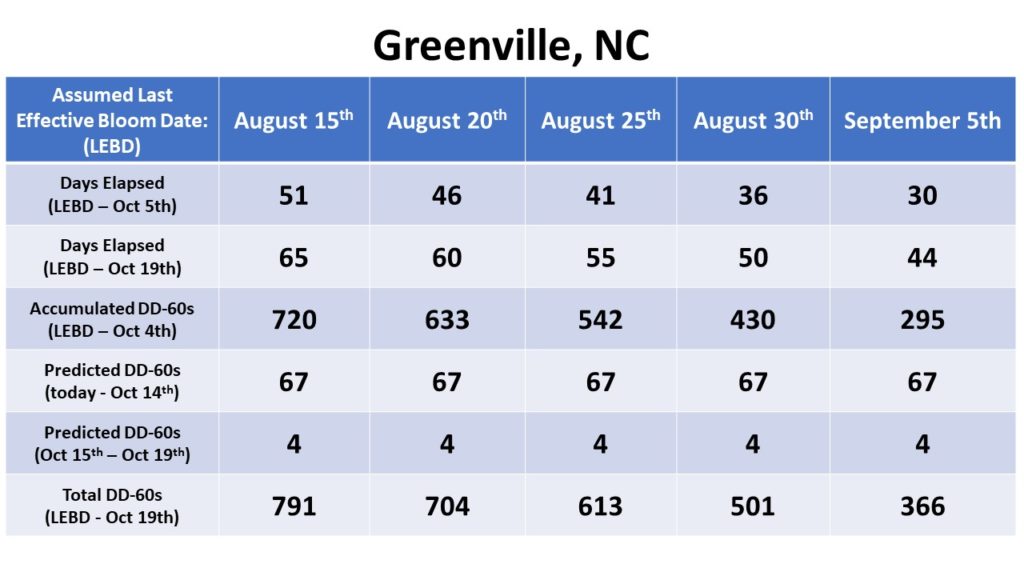 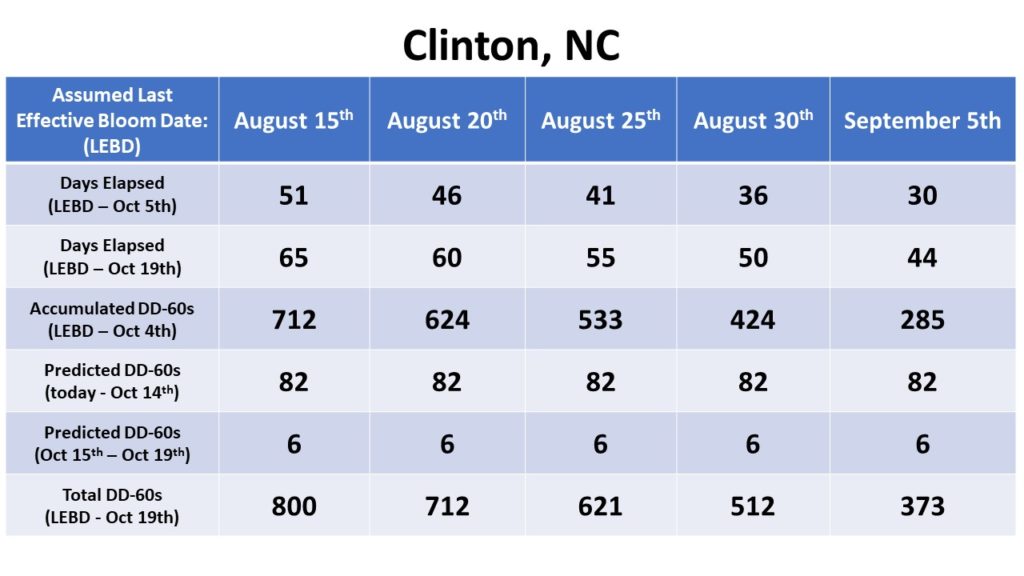 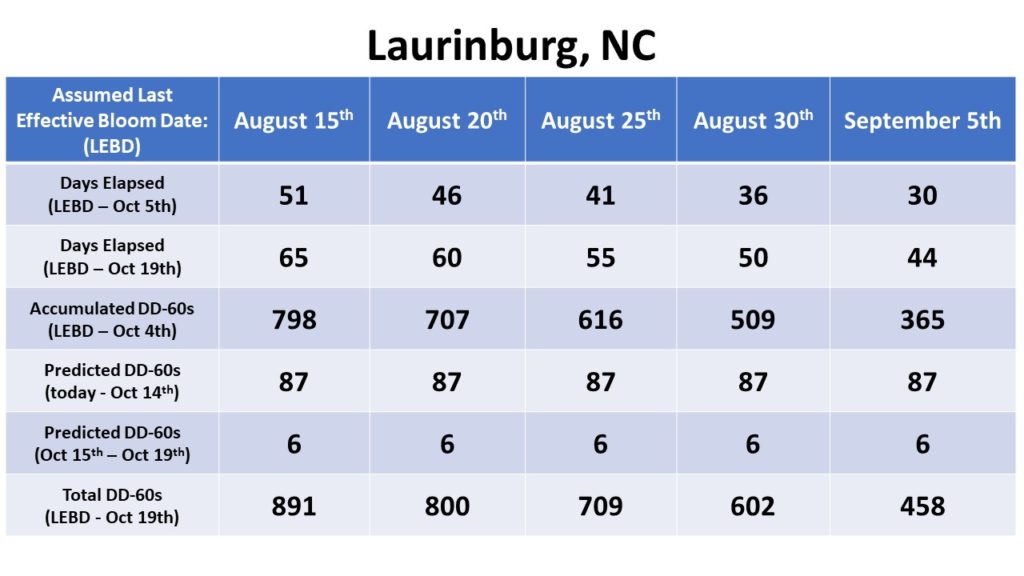 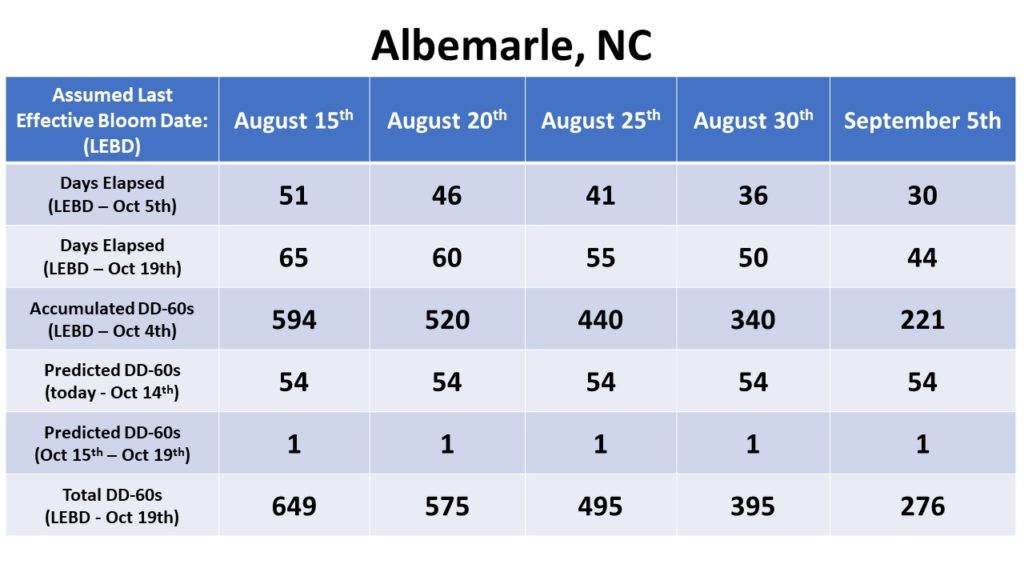 When defoliating, growers should consider using a high rate of ethephon in their tank mixtures. The highest rate allowed is 2.67 pints/A of 6 lb a.i./gal ethephon material in any form. Growers may also want to consider using products like Finish or Terminate (ethephon + cyclanilide) which is more active in cooler temperatures and more effective at opening bolls than ethephon alone in cooler weather. Although it is not used as much as it once was, CottonQuik or FirstPick (ethephon + urea sulfate) is also very active in cooler temperatures and more effective at opening bolls in less than ideal conditions (daily highs/lows in the 60s/40s). Some folks have some TDZ (Dropp, FreeFall, others) on hand that they would like to use up. The best chance for high efficacy of these products will be this week on the warmer days during that time. The activity of TDZ begins to diminish when nighttime temperatures dip below 60 degrees on a consistent basis. The lower the temperatures are, the less efficacy TDZ will have, and any activity from TDZ will be noticeably slower than normal. Beyond the warmer days this week, switching to TDZ+diuron (Ginstar, Cutout, others) will be necessary. Using TDZ+diuron  even now in northern or Piedmont areas of the state and throughout the entire time may also be a good decision, given that we have several nights in the 50s coming our way.

In cases where growers have already defoliated, and most leaves have been removed but some upper bolls are hardened but still will not open, the use of paraquat can sometimes promote boll opening, especially when cool temperatures prevail. This should NOT be done in the first defoliation, but rather only when some bolls refuse to open following our best efforts to defoliate and open bolls with ethephon-containing materials and nearly all leaves have been removed. This strategy may or may not work, and will not further enhance boll maturity, but occasionally it can be effective at opening near-mature bolls that otherwise would not open on their own due to cooler weather. If this strategy is used, keep in mind that the application cannot be made within three days of harvest. With that said, desiccation is to be expected, therefore waiting longer than 4-5 days after application to harvest will likely increase the chances of desiccation, bark, or poor leaf grades, etc.