Find this article at:
go.ncsu.edu/readext?743913
— Written By Guy Collins

The weatherman’s predictions for this week and this coming weekend was fairly accurate, however, he’s had a major change of heart about the weather next week. In our last update this past Monday, the forecast suggested a major cooling period beginning tomorrow and lasting through the 26. Beginning today, this weekend is still predicted to be rather cool, however, the most current forecast suggests that temperatures throughout next week will be noticeably warmer than was originally forecasted. The tables below have been updated with accumulated heat units to date, and a current forecast through October 30. 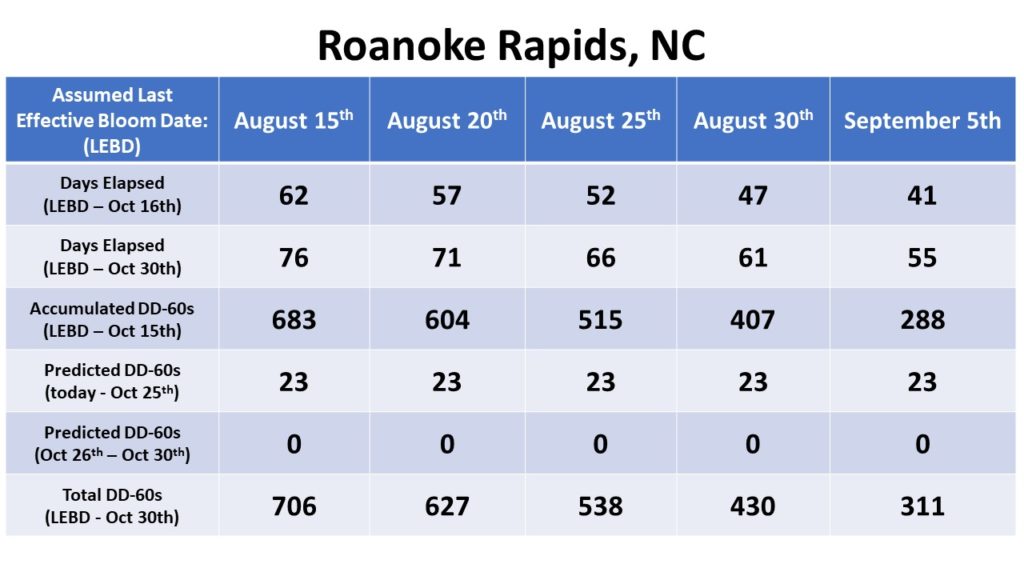 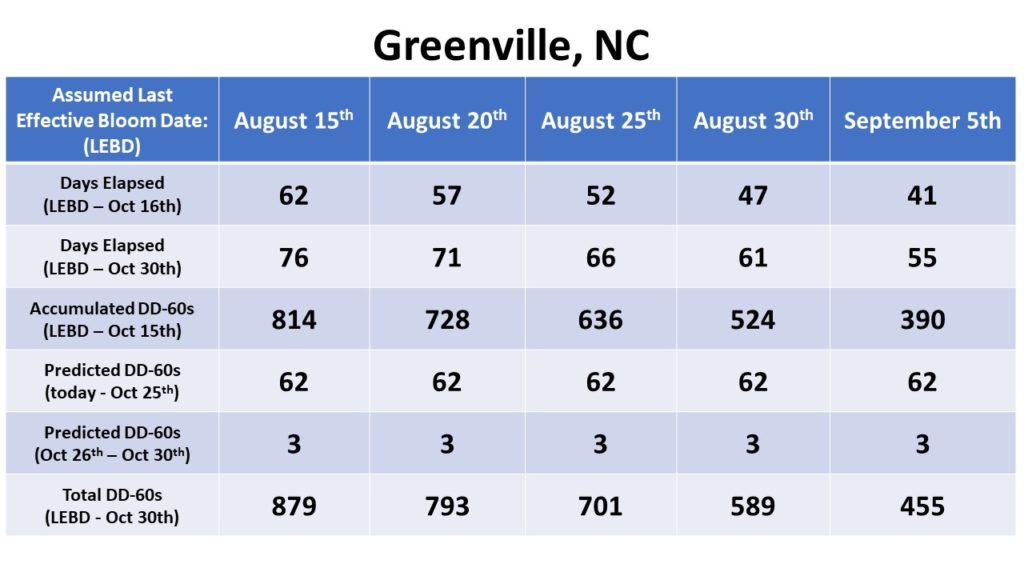 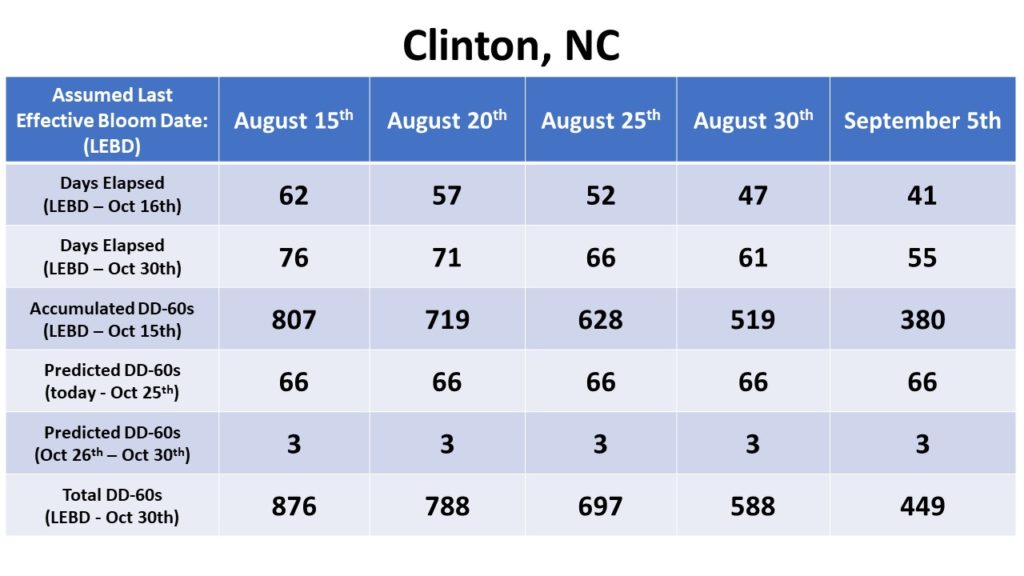 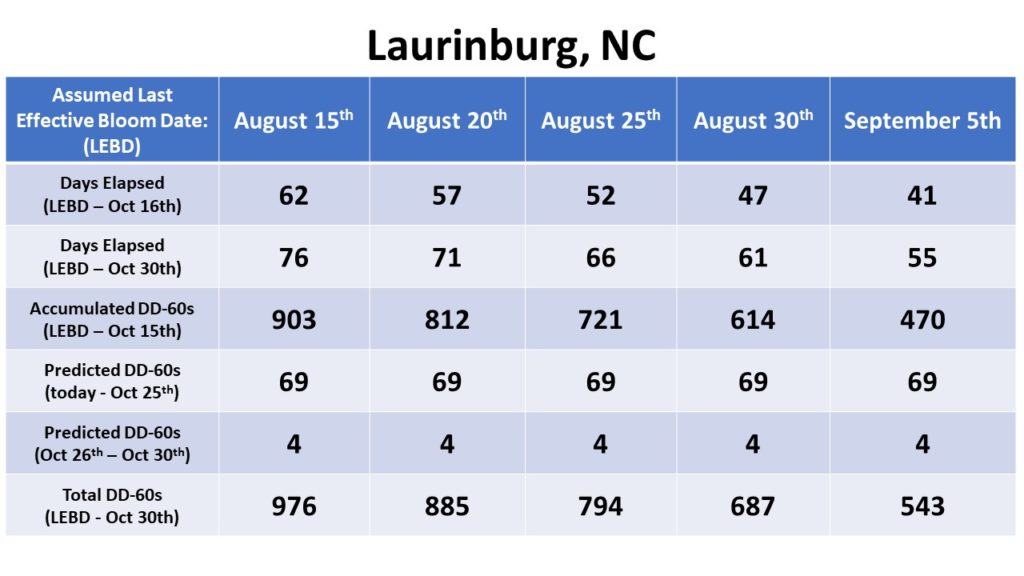 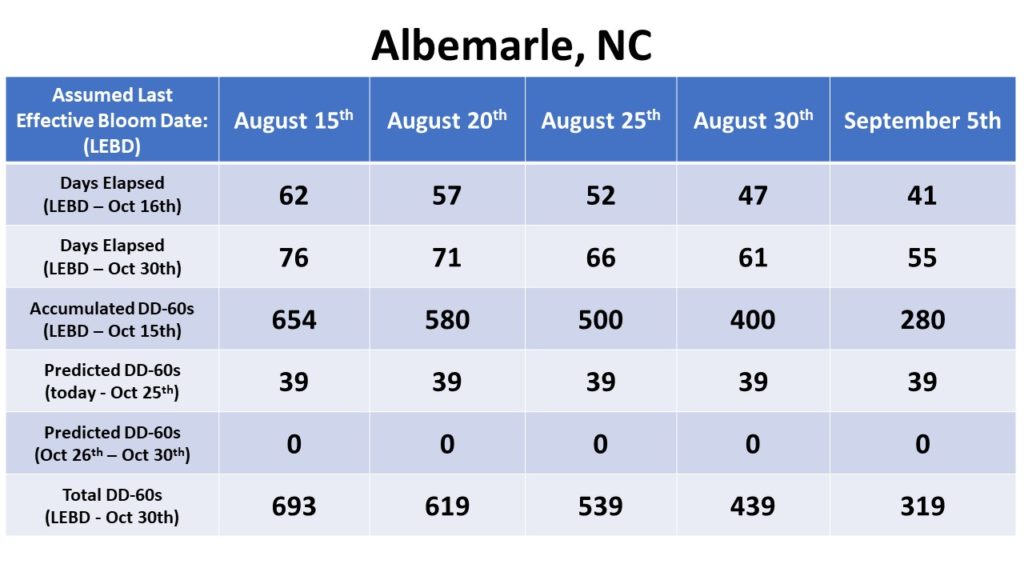 As of today (the 16th), we have now reached, or are very close to the 60-day requirement for bolls to reach maturity for Last Effective Bloom Dates of August 20th or earlier. By October 30th, we will have reached this requirement for Last Effective Bloom Dates of August 30th or earlier. However, this 60-day benchmark assumes “normal” heat unit accumulation. As has been said many times, we have experienced an abnormally cooler September and early October, which also influences maturity. Although heat unit accumulation isn’t 100% accurate in predicting boll maturity, it does count for something, and is really the only current model that we have to use. In the best case scenarios, based on a wide range of replicated trials conducted across the cotton belt over the years, bolls loosely require a minimum of 800 heat units to reach maturity. Therefore, again in the best case scenario, the Greenville and Clinton areas have reached this requirement for the August 15th Last Effective Bloom Date. The Laurinburg area has reached this for the August 20th Last Effective Bloom Date. Points north of Greenville or in the Piedmont have not yet reached the 800 heat units to date, nor are they predicted to reach this level by October 30th. As we now see in the updated forecast, some heat unit accumulation is predicted through next week, however the number of heat units predicted varies rather widely across the state, with the southern-most counties expected to acquire noticeably more heat units than northern counties or the Piedmont.

The current forecast suggests fairly warm temperatures next week, however a cooling spell is now expected to begin sometime next weekend (October 23rd-25th) depending on location. This weekend will likely be rather cool, however some meaningful heat unit accumulation is expected from Monday through Friday of next week. These heat units could help mature a few bolls, especially in the southern half of the state. So do we wait it out for fields that have yet to be defoliated in hopes of making progress in boll maturity, or do we continue defoliating throughout next week? That depends on many factors.

All we have at our disposal to make these critical decisions is the weather information that we have on hand at any given time. Drastic changes in the forecast as time elapses can make these decisions more difficult, or wish we would’ve done something different. Most growers have defoliated some proportion of their acres already, as they should have, and that proportion varies widely. Given the forecast for this weekend, it is probably best to hold off for now, and resume defoliating on Monday, since it’ll be very difficult to open bolls in the expected weekend temperatures. Also, if bolls are far from maturity, and do not have a well-formed seed and still have jelly inside the seed, our hopes for maturing those bolls are gone by now. The bolls that are firm, difficult to pop with pressure, and have well-formed seed may still have a chance and may benefit from a few days of heat. With that said, your total acreage AND the proportion of your acreage already defoliated should play a role in these decisions.

Beginning on Monday, if a rather low percentage of your acreage remains to be defoliated, AND bolls in these fields are close enough to maturity but could use some heat to mature them, then it may not hurt to wait a couple of days. The success of waiting is more likely in the southern counties where greater heat unit accumulation is expected next week. However, all growers are encouraged to take action and defoliate any remaining acres at least 2-3 days ahead of any expected prolonged cooling spell. Therefore, growers should continue to slice upper bolls to gauge maturity, with realistic expectations of which bolls might be harvestable at this point, and watch the weather forecasts frequently for any unexpected changes. For growers, especially those with a sizeable acreage, that have defoliated very few acres to date, you need to resume defoliating as soon as favorable conditions return (right now, that looks like Monday for most areas). In effect, the weather man’s change of heart about next week has given us another week in which we can defoliate under ideal conditions with relatively higher hopes of opening bolls. Waiting for further bolls to mature will only pay off for bolls that are very close to maturity as of right now, and we shouldn’t wait until the next cool spell arrives to resume defoliating, as it’ll be very difficult to open bolls then. Growers that have defoliated very little to date, and have a large number of acres to spray, shouldn’t wait at all, as they are already behind schedule, and harvest progress is always slower in November when temperatures do eventually fall.

This drastic change in next week’s forecast was a pleasant surprise. Continue to monitor the weather forecasts for changes such as this, which may play a role in your decisions.