Find this article at:
go.ncsu.edu/readext?748213
— Written By Guy Collins and last updated by Keith Edmisten

For three weeks in a row, the weatherman has ‘kicked the can down the road’, with long-term forecasts predicting that the week after the current one would bring a cool spell. Luckily for us, his predictions were wrong, and each of these last three weeks were noticeably warmer than was predicted in the long-term (14-day) forecasts. This gave us a few more heat units to develop bolls perhaps in the southern counties, but the greatest benefit by far was that we were able to defoliate this crop under fairly good conditions, which enhanced activity of our boll openers. We have been surprisingly successful at opening bolls throughout October when using the right rates of the right products, albeit boll opening has been slower than normal.

Given how unreliable the long-term forecast has been, which benefitted us in the end, we’ve waited to put out this newsletter until the forecast had some certainty. As of now (Friday morning, October 30), forecasted temperatures suggest that there is potential for a light frost Sunday and Monday nights (November 1–2). If a frost occurs, this would be right on time to slightly late. Typically we start looking seriously for a frost to occur between October 20–31, and occasionally we observe one earlier in October. When forecasted temperatures are expected to be around 34-35°F, we often see freezing temperatures or a light frost occur in bottom areas, and when temperatures fall below 31°F, we expect to see a severe frost (28°F or below) in some areas as well. In addition to temperature forecasts, we look at expected rainfall and nighttime wind speeds, as wind or rainfall could prevent a frost from occurring. The tables below illustrate the above parameters that we consider for several areas across the state. Right now, there is potential for a light frost Sunday or Monday night, depending on location with the state, however there is potential for rain Sunday night, and perhaps a little wind in only a few areas on Monday night. 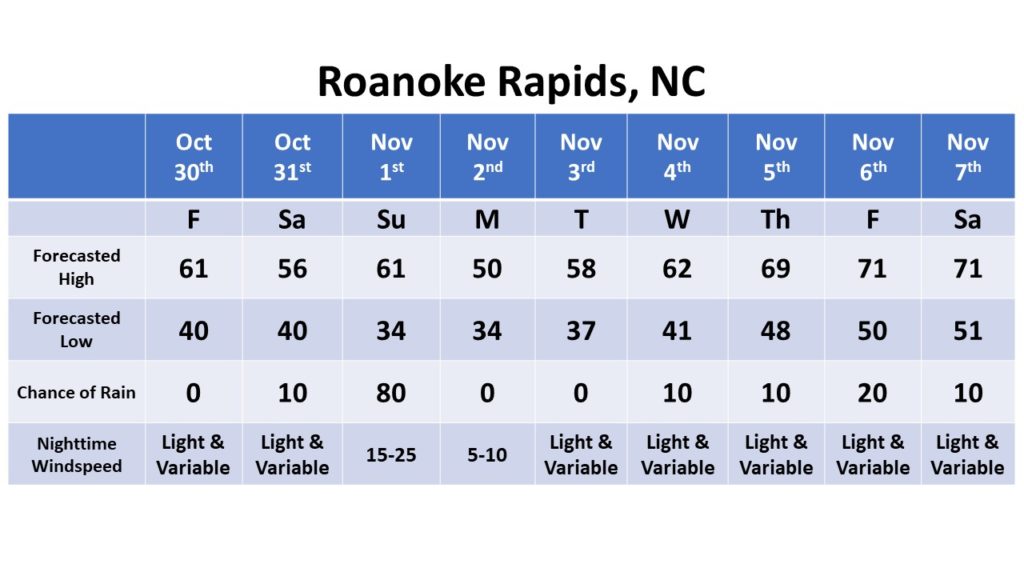 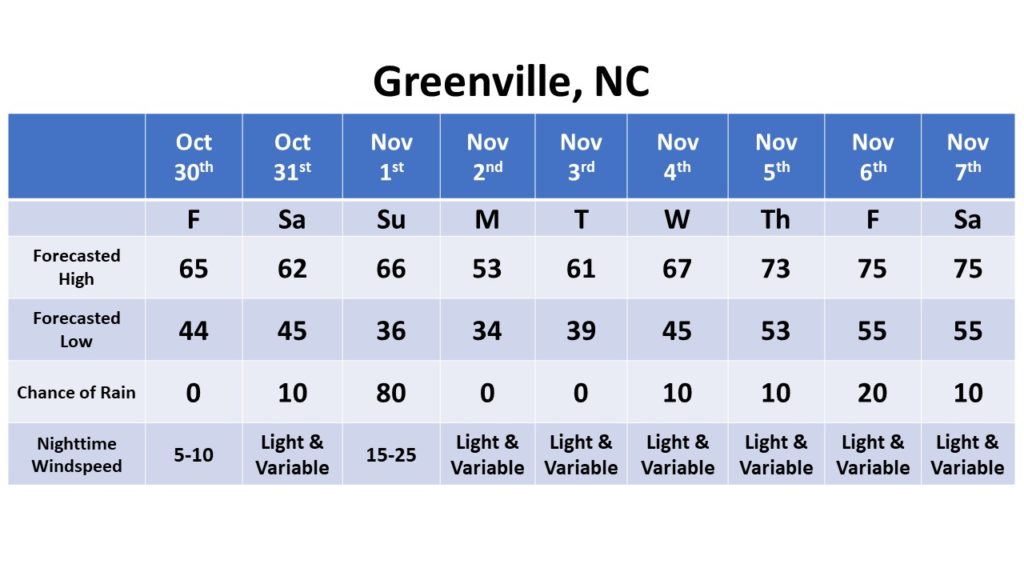 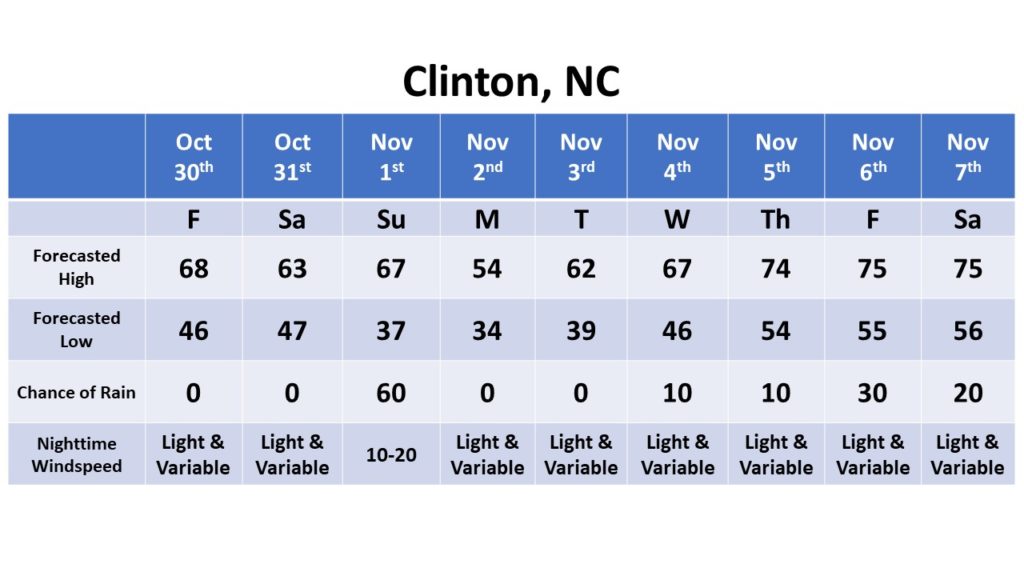 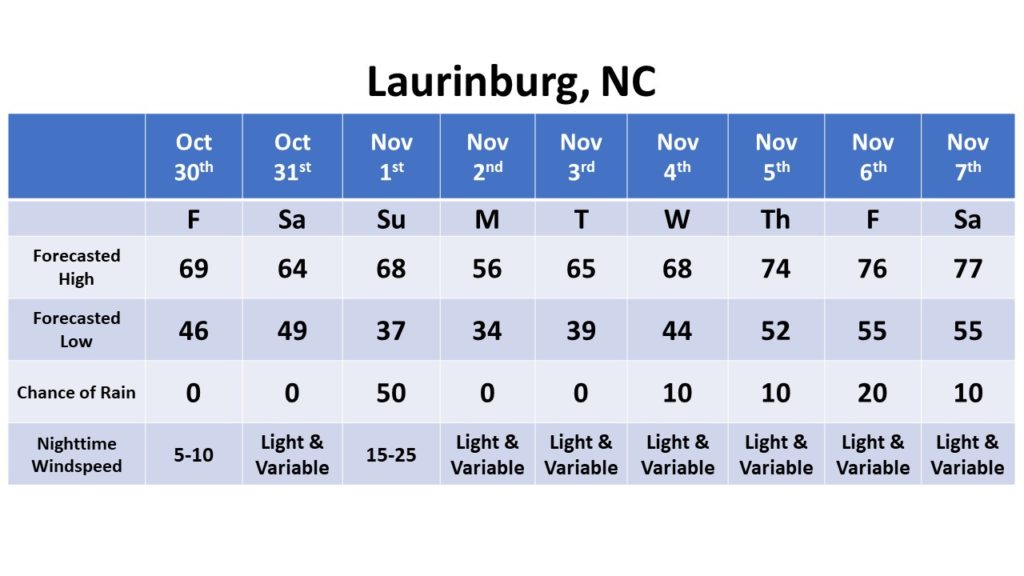 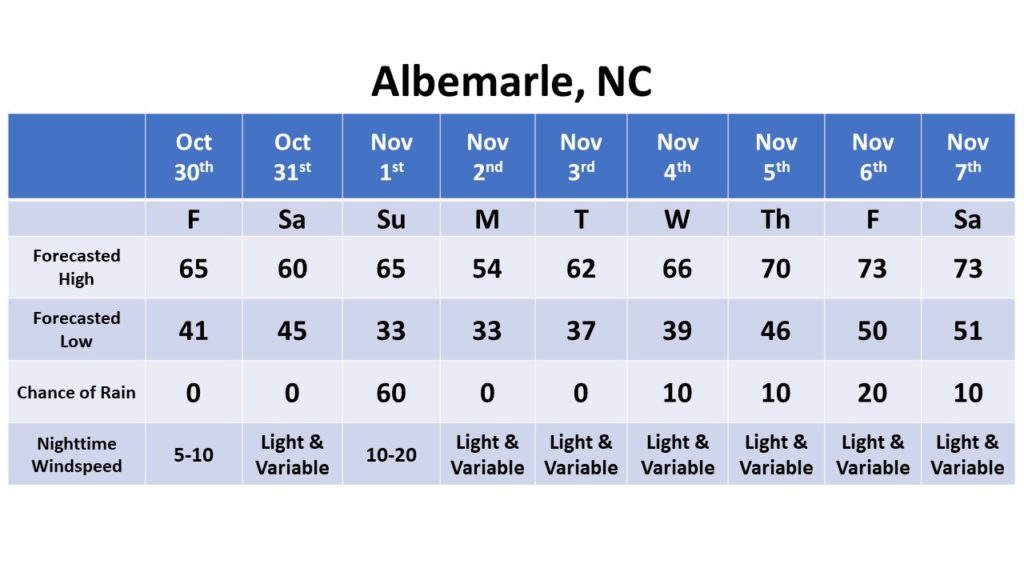 Most cotton has been defoliated already, as it should have been, and harvest is underway in most areas. IF a frost occurs, it is recommended that defoliation occur before the frost and as many days ahead of the frost as possible. IF a frost does NOT occur, it would probably be best to resume defoliation no earlier than next Wednesday, November 4, when warmer temperatures resume. Growers are strongly encouraged to observe their local weather forecast and make a decision NOW. If you think a frost is likely in your local area, defoliate the last remaining acres TODAY.

Fields that have already been defoliated but still have a few hardened, fairly mature bolls that have not yet opened: Hopefully, fields that have already been defoliated received a very high or the maximum rate of ethephon when it was defoliated, and all or most leaves have been removed. If it has been more than a week since it was defoliated, growers could try applying paraquat to hopefully stimulate opening of a few bolls prior to a frost. Per the label, harvest should not occur within 3 days of applying paraquat, but we recommend that harvest not be delayed more than a week after application, as desiccation may result in higher bark or leaf penalties.

Fields that have not yet been defoliated: Defoliate now (today), using a high rate of Finish/Terminate/others, and preferably spiked with additional ethephon in order to reach the maximum amount allowed. (2.66 pints/A of 6-lb a.i./gallon, regardless of the product/form). Several growers have been successful with a quart/A of Finish, spiked with 10.5 oz/A ethephon, along with Folex or Ginstar/Adios/Cutout. At this point, thidiazuron+diuron (Ginstar, Adios, Cutout, others) at 6.5-8 oz/A would be necessary to remove green leaves or regrowth. Depending on rates of tankmix partners, the 8 oz rate may be appropriate given that we expect to see nighttime lows in the 40s starting tonight.

Arguably, if accessible, another option would be to use CottonQuik or FirstPick (1.5-2 quarts/A) which is effective at defoliating and opening bolls in cold weather, which we now have. Tankmix partners with CottonQuik/FirstPick have not been evaluated for quite a while, due to seldom use or interest in this product.