Find this article at:
go.ncsu.edu/readext?889432
— Written By Guy Collins

The dreaded storm is upon us. By tomorrow morning, we should all know what the impact on our crop will be. As this article is being written, we are now in the storm but alot remains to happen, so the remainder of the day today (Friday) through tomorrow morning will determine the final impact. As of now, most of our cotton growing areas will likely experience anywhere from 20 to 35 mph winds, with areas closer to the eye experiencing closer to 40 to 55 mph winds. Gusts, of course, could be higher. Rains are forecasted to be 4 to 6 inches across much of the state. As dry as we’ve been, with rivers and creeks relatively low at the moment, our ground will likely soak up alot of that. Flooding is less of a concern this time, although low lying areas are vunerable. Neither rain nor the wind, each alone, is much of a concern, but the combination of both makes us nervous, and cotton losses are likely and expected. Sustained winds over 20 mph, accompanied by heavy rainfall, concern us for the cotton crop. When we experienced the remnants of hurricane Michael a few years ago (30 to 40 mph winds and lighter rain), losses ranged from 100 to 200 lbs/A. There are alot of variables that influence potential losses, so we are still hopeful that losses are minimal, but we also know that some loss is likely.

The timing of this storm is of concern. Our crop was, and is, trending about 2 weeks early so a high proportion of our bolls are open, more so than in other years during this time of year. We hope growers were able to harvest as much of the defoliated crop as they could before this storm hit.

We’ve been watching this storm very closely all week. The forecasted pathway and predicted rate of progression has changed quite alot from that of earlier this week, and has changed almost daily until very recently (illustrated below). Once it approached the gulf side of Florida, it seems that this storm has held a more Eastern path within the predicted cone, and has moved relatively slower than predicted at times. Over the course of the week, forecasts has displayed a rather wide cone as well, illustrating a high degree of model uncertainty about its likely path. We were hoping to dodge this one, or at least have minimal impact. Nevertheless, here we are. 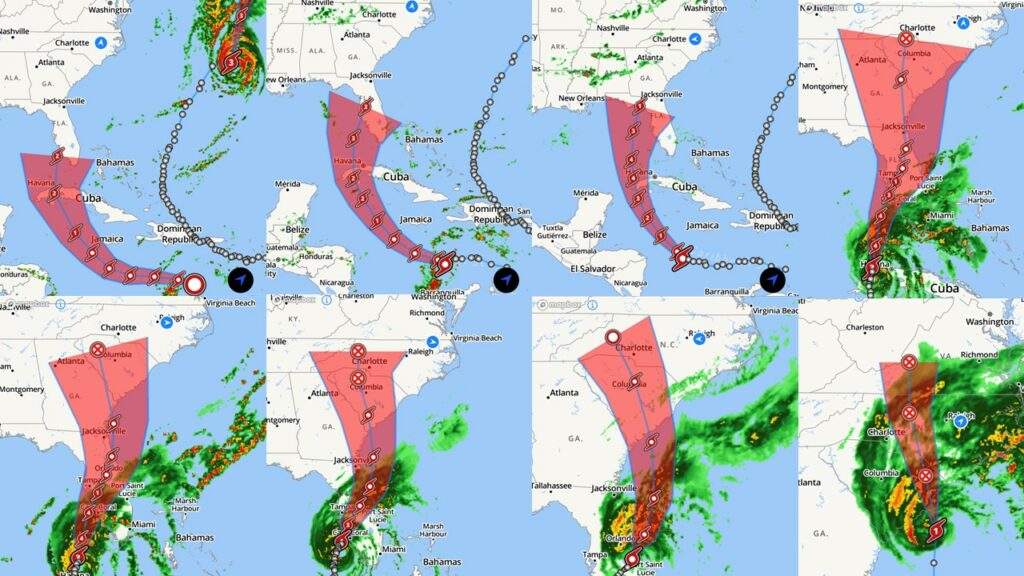 Where do we go from here? The first action we should take is to document losses. Storm losses are difficult to estimate, but depending on crop insurance and other programs, it is usually worth the effort to document losses. Once the storm passes, grower should contact their crop inurance agent or adjuster (or facilitator of other pertinent programs) if it is needed. They may have particular instructions for documenting and reporting losses. Such documentation should be done before harvest, and some adjusters may want to see the field(s) prior to harvest. Documenting losses by taking photos of such losses using a cell phone is important. Make sure the photos include a point of reference within the photo to document particular fields. As we’ve stated many times before, during tropical events such as this one, fully open cotton is vunerable to falling out of the burr and partially opened or cracked bolls are subject to hardlocking. One method of documenting losses is to count the number of locks that have fallen out of the burr (and onto the ground) while also counting hardlocked bolls which will likely shatter during harvest. A general rule of thumb for estimating yield potential is that 12 bolls per foot of row on 36-inch rows is roughly equal to 500 lbs per acre. Using this method and back-calculating to the number of locks present, one could calculate a very general estimate of storm/weathering losses. Within this rule of thumb,  4 to 5 locks per foot of row fallen to the ground would equate to a 50 lbs/A loss. One truly hardlocked boll would equate to 4 locks in most cases. Partially hardlocked bolls are difficult to evaluate as some of that cotton may still be harvestable. It is important to note however, these are very general methods of evaluating losses, as other variables (seed size, differential bolls size from the top to the bottom of the plant, moisture, etc) influence how many bolls per foot of row equate to a bale/acre. 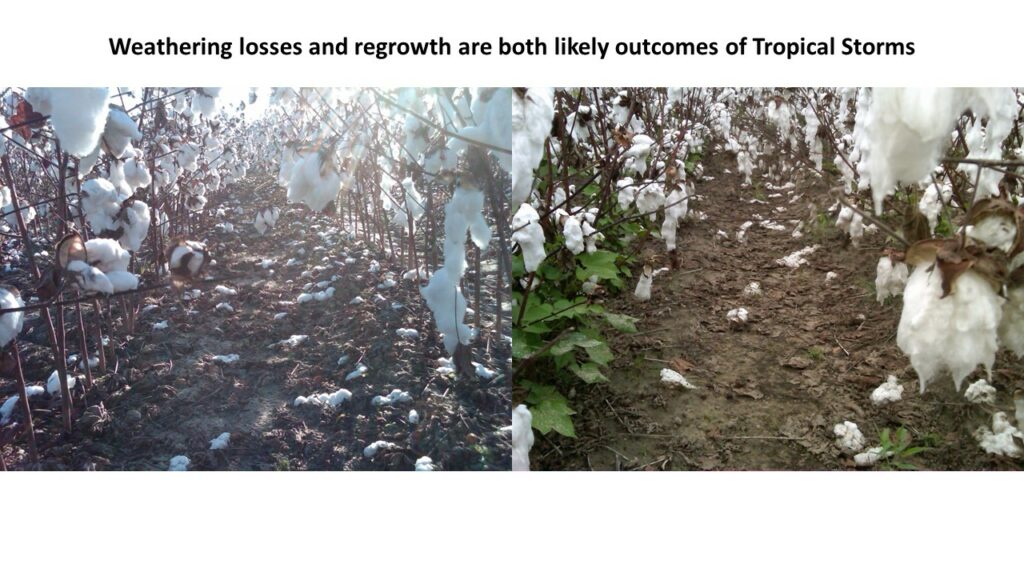 Hopefully, anyone with fields that still had a number of closed bolls ceased defoliating a week ago, and focused their efforts on harvesting fields that were defoliated over the last couple of weeks. Once it is dry enough to re-enter fields (hopefully later this coming week), defoliation can resume. Places that have received any rain at all prior to now have been showing signs of regrowth, which has been substantial is some places. Regrowth should be expected from this point forward, albeit slower due to cooler weather, so it should therefore be addressed by using appropriate rates of the right products in tankmixtures. Also, any remaining closed bolls should be evaluated for maturity. Most closed bolls are relatively mature, due to a dry and warm late August and early September, but some could be debatable. The forecast for the forseeable future suggests a fairly drastic cool-down for the next couple of weeks. Daily highs are projected to be in the high 60’s to mid 70’s with nightime lows ranging from the the high 40’s to low 50’s. Therefore, hormonal products will likely work less and slower. To address regrowth, now is the time to switch a TDZ+diuron (Ginstar, Adios, CutOut, etc.). To address boll opening, especially in cases where boll maturation is in question, or real close to the line, now is the time to switch to Finish/Terminate, or a higher rate of regular ethephon (if closed bolls are fairly mature).