Like most years in North Carolina, 2022 was certainly unique and brought its share of challenges. Dry, hot weather prevailed over most of the state beginning in late May which persisted through June, and again during late August in many areas. Despite the noticeable drought across most of the state, most growers were pleasantly surprised at their yields, while others experienced expected yields, given the challenges that occurred. Rainfall patterns were spotty throughout most of the summer, however, higher yields were noticed in areas that recieved rain earlier than other aress during the prolonged June dry stretch that affected most of the state, or during early July when rains returned. July rains were modest, but timely for some growers, and rains continued through early to mid August. The 2022 crop trended earlier than normal due to timely planting, heat unit accumulation during the summer months, and the lack of rain during late August which ceased upward growth in most areas. Additionally, we experienced little to no losses from the hurricane during late September, and no prolonged foggy/cloudy/damp weather during September. October was slightly cooler than normal, and first frost occurred on the earlier end of timeframe we expect to have one (October 20th), but most of the NC crop was finished by that point. Generally speaking, yields were higher than expected across the state, except in a few areas that experienced drought further into July than most parts of the state, and a few isolated cases of boll rot and hardlock during September.

Thanks to our stellar cooperating growers and county agents, we were able to successfully complete another year of the North Carolina On-Farm Cotton Variety Evaluation Program. Additionally, this program was once again a huge success in 2022, thanks to the substantial support from the NC Cotton Producers Association, N.C. Department of Agriculture and Consumer Services, NC State University, our Seed Companies, and Cotton Incorporated. The support and contributions of all involved are much appreciated, and will have significant impact on our growers’ bottom line as we look forward to a hopefully another prosperous 2023 season.

As in years past, this on-farm program consists of the most widely-adapted and best-fit varieties for North Carolina cotton growers as determined by our leading seed companies. It is always advised that variety decisions be based on multi-environment and multi-year replicated data in order to identify varieties with a high degree of stability (strong performance across a wide range of environmental conditions and years). As a standard practice, it is always wise for growers to choose several varieties and position those varieties in environments where they are likely to perform competitively. It is also advised that growers observe data from both the on-farm program and NC State University Official Variety Trials (OVT) which will be available very soon. Both programs serve as platforms for effective evaluation of variety performance but are different in several regards. One of the primary strengths of the on-farm program is the vast number of environments that are effectively captured in a given season. However, OVT can accommodate many more varieties than we can effectively evaluate in an on-farm trial, and many of our seed companies have several competitive varieties (including brand new, recently released varieties) available for North Carolina producers, many of which are evaluated in OVT. Together, the On-Farm and OVT programs collectively offer growers a complete platform for making variety decisions.

Within the 8th year of this program alone, the on-farm program again has clearly demonstrated that variety selection is one of the most important decisions a grower can make that will significantly impact their profitability in a given year. Depending on the degree of variety selection error, the 2022 on-farm trials clearly illustrated that producers could lose an average of $130 to $278 per acre due to improper variety selection, with a potential statewide economic value of $59,150,000 to $126,490,000!! Keep in mind, that these figures are based on performance of the best varieties from each brand, therefore a producer could do much worse than this by potentially choosing a less competitive variety.

Variety performance information will be discussed in much greater detail during the upcoming winter meetings (look for meeting dates/locations for your county at your local N.C. Cooperative Extension office or on the NC State University Cotton Portal (meeting dates will be listed soon). Additionally, your local county agent is an excellent resource for variety selection, so please contact them for your local trial results and they will be happy to share those results with you. Additionally, the NC Cotton Variety Performance Calculator, launched in early 2016, is an excellent resource for growers to use to make customized variety comparisons based on geographical region, yield environment, years or multi-years, and trial type. The calculator is now updated with lint yields and lint percentage for the 2022 On-Farm trials, with HVI fiber data to be added later. Particularly unique to 2022, we had a Enlist-only trial (Washington) as well as a XtendFlex-only trial (Stanly). Therefore, if a user selects “2022” and “all locations”, an incorrect calculation will appear because all varieties did not appear in all trials this year. To observe performance data across locations for the 10 Core varieties that appeared in all but the two aforementioned trials, users must manually select all other trial locations, excluding “Washington Enlist-only” and “Stanly XtendFlex-only” and the correct calculation will appear. This applies to all other calculations such as making selections under “Trial average yield”, multiple years, or combining Large-plot trials with OVT, where these same two locations must be excluded in order to observe the correct calculation. The calculator will be updated with OVT data as soon as those results are in from the statistician. 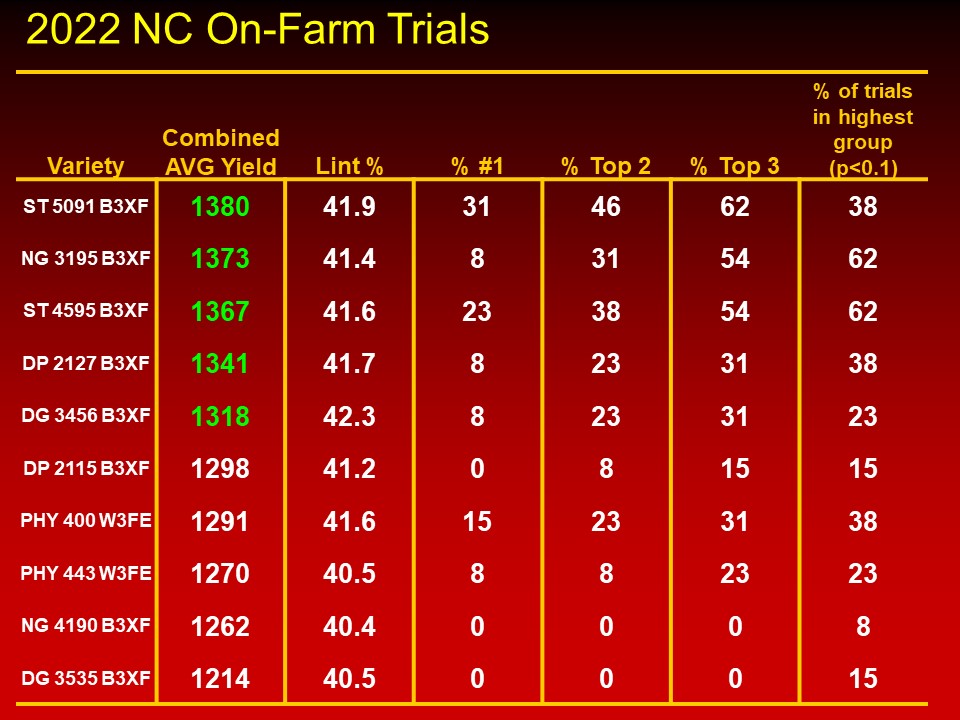 In this slide, varieties are ranked in descending order according to average yield across all trials in the analysis. Varieties with yields highlighted in green indicate that yields were above average across all locations. The percentage of trials in which a variety was the highest yielder, within the top 2, within the top 3, and most importantly, within the statistically highest yielding group are also shown. As mentioned earlier, individual trial results can be obtained from your local county agent and in the variety calculator. Results for OVT and fiber quality will be available soon. Again, growers are also encouraged however to observe multi-location and multi-year data before making variety decisions. Due to the clear variation in performance between trials and years, it is not wise to base variety decisions on results from a single trial or even a small number of trials.

We want to reiterate our appreciation to all of our leadership organizations (NC Cotton Producers Association, NCDA&CS, NC State, Cotton Inc.) and Seed Companies for their efforts and support in this program for the benefit of all North Carolina cotton growers, as well the diligence and hard work that our county agents, consultants, and cooperating growers put into this program during 2022. This program was a success again in 2022 due to the efforts of all involved and we look forward to another year of this program in 2023!