Find this article at:
go.ncsu.edu/readext?418539
— Written By Dominic Reisig

As noted in this complementary article, bollworm populations have been heavy this year in corn and they are breaking through a lot of Bt corn. What that means for cotton growers is that they need to be prepared to spray overtop of some Bt cotton this year, especially Phytogen (WideStrike) varieties. Timing and spray chemistry is critical to maximizing yield. The recommendation below only applies to North Carolina during 2016 and is the result of conversations with previous NCSU entomologists Jack Bacheler, John Van Duyn, and JR Bradley, as well as Midsouth university Extension entomologists.

Our usual threshold for Bt cotton is based on larval sampling from fruiting tissues (see NC Cotton Insect Scouting Guide). Entomologists from the Midsouth recognized that certain Bt cotton varieties could benefit from an overspray of an insecticide with the active ingredient chlorantraniliprole (Prevathon). Some benefits this insecticide provides are a long residual, the ability to move to growing tissues, and specificity for caterpillars, including bollworm. They also found more benefit to spraying WideStrike cotton, compared to Bollgard II, TwinLink, or WideStrike 3. They also found that chlorantraniliprole only provided this benefit when 1) bollworm was present in large numbers and 2) when it was sprayed before larvae were present, in contrast to the NC threshold recommending sprays based on larval presence.

In North Carolina during 2013, we sprayed WideStrike cotton (PHY 499) with a high rate of Prevathon (27 oz) at bollworm threshold in replicated fields and compared them to replicated unsprayed fields. Populations continued to exceed threshold in untreated plots and bollworm injury was higher in unsprayed compared to sprayed plots. Yields were different by only one lb. During 2014, we repeated the experiment, but sprayed when bollworm had laid eggs and before larvae had hatched. Even though populations and injury were similar between 2013 and 2014, yield was higher by 90 lbs. in the sprayed plots. 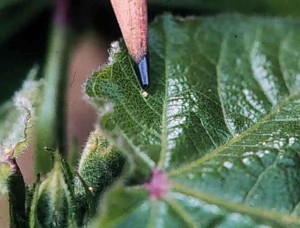