Bollworm Flight Beginning in Some Locations

Find this article at:
go.ncsu.edu/readext?712840
— Written By Dominic Reisig 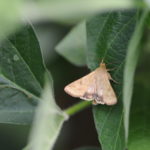 Two bits of information today tell me that we are likely beginning the main bollworm flight of the year. First, a consultant called finding eggs in Bollgard II cotton. Secondly, light trap captures are up in some locations, including traps in Scotland and Edgecombe counties. While trap activity hasn’t picked up in the northeastern part of the state, yet, we can bet it’s coming. We’ll know how big this flight may be in the next week or two. It is very important that we avoid disruptive insecticides unless necessary (such as to treat stink bugs) while this flight is on.