Find this article at:
go.ncsu.edu/readext?870056
— Written By Guy Collins

Several folks got some rain yesterday and last night, although rains were spotty and some areas continue to be severely dry. This is clearly evident by observing the corn crop in many areas across the state. Regardless, any badly needed rain we received in places will be gone soon with the anticipated excessive temperatures in the forecast this week. Next week doesnt look much better in terms of temperatures and the chances of rain aren’t real strong for quite a while.

There isn’t much cotton that has begun squaring just yet. Only the earliest planted cotton has barely started squaring, but more will begin squaring later this week or sometime next week.

Cotton does not need much water to function when it is young. Demands for water increase with plant size and when fruit are developing. Demand for water will increase between now and first bloom, and will peak during mid bloom before demands gradually subside. Although cotton does not need much water right now, or even during squaring, it still needs SOME water to function and develop young fruit and yield penalties can occur if drought prevails during this time. Therefore, irrigation may be necessary for growers who have the capabilities to irrigate.

There is a mindset among several in the cotton industry that cotton should be stressed prior to bloom so that it can set deeper roots. Keep in mind that roots growth IN RESPONSE TO moisture, NOT IN SEARCH OF moisture. Also, there is a VERY FINE LINE between having just enough subsurface soil moisture to stimulate root growth and insufficient moisture that could lead to yield penalties. Therefore, irrigating during squaring may be necessary to avoid penalties associated with severe drought, and it will not likely hinder root growth. Constant excessive rainfall that leads to saturation and standing water in fields over a period of time can cause a shallow-rooted crop, but irrigating during hot dry periods will not limit root growth.

We did some work in Georgia a few years back that quantified the impact on yield when irrigation was withheld during squaring AND when severe heat and no rainfall occurred. The following describes the weekly water requirements according to the UGA checkbook method that we utilized in this particular experiment. Keep in mind that these weekly rates should be split into 2 irrigation events and adjusted for any natural rainfall that occurs during any particular week of development.

As seen the in the chart above, 0.75-1″ per week is needed for cotton during squaring. In reality, the plant uses less initially and needs more as the plant grows bigger and develops more squares. In this particular experiment, where we honed in on irrigation during squaring, all treatments were irrigated according the schedule above, once it reached first bloom, except for the “dryland/rainfall only” treatment. It should also be noted that this was considered to be a “wet” year, especially during the bloom period. Treatments consisted of 1.) normal irrigation (according to the chart above) season-long which included 1″ per week during squaring, 2.) no irrigation during squaring followed by normal scheduled irrigation, as seen above, once the bloom period began and beyond, and 3. dryland/rainfall only check. The chart below illustrates both rainfall and irrigation amounts for each of these treatments throughout the season.

The blue bars represent the normal irrigation schedule season-long, which called for 1″ per week, adjusted for rainfall, during each of the 3 weeks of squaring, and normal irrigation adjusted for rainfall beyond first bloom. The red bars represent NO irrigation during squaring followed by the normal irrigation schedule beginning at first bloom and afterwards, and the green bars represent the dryland / rainfall only check. The little black lines illustrate the weekly targeted amount needed, according the chart above, for each week of development. As you can see, there was nearly enough natural rainfall during weeks 1 and 3 of squaring to nearly meet each of those weeks’ water requirements. No rainfall occurred during the 2nd week of squaring (there was about a 10-day period of hot, dry weather), and that treatment (red bar) along with the dryland check (green bar) reached the point of wilting during that time. Beginning at first bloom, we met the weekly water requirement through irrigation or natural rainfall for ALL treatments except the dryland check, and by weeks 4, 5 and 6 of the bloom period, rainfall was excessive and surpassed each weekly water requirement, in some cases after we irrigated. We’ll revisit this later.

So the only true hot/dry time that caused cotton to wilt during squaring was the 2nd week of squaring (~10-day stretch of hot, dry conditions). This one period of neglecting to irrigate caused significant yield penalties as seen below. 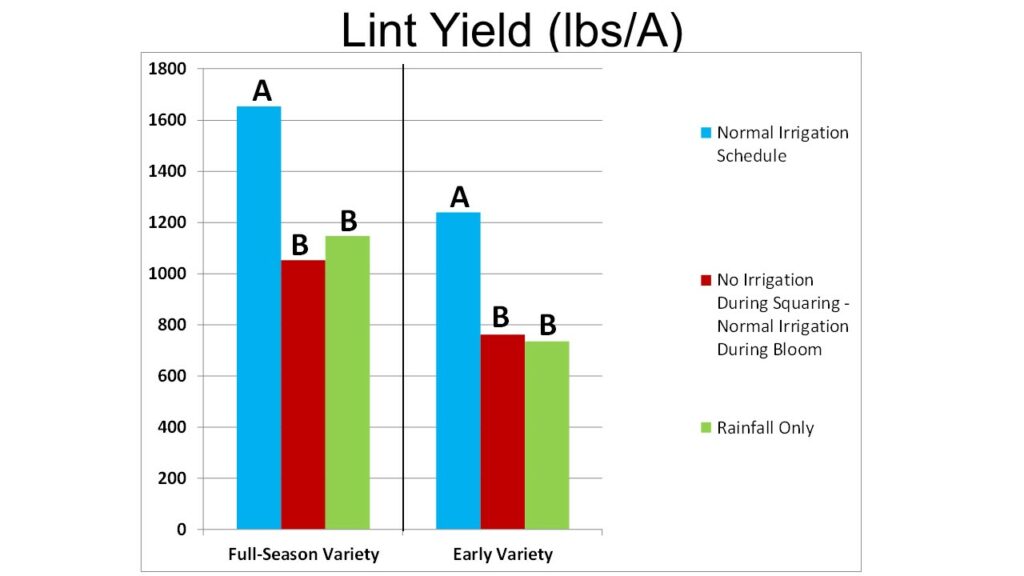 The red bars correspond to the treatment where no irrigation was applied during squaring but normal irrigation rates resumed at first bloom and afterwards. For both the full-season and early variety we evaluated, neglecting to irrigate during the 2nd week of squaring alone resulted in yield penalties of 400-600 lbs/A. Yields were no different than the dryland check, despite the fact that it was irrigated according to the schedule beginning at first bloom and for the remainder of the year. Additionally, natural rainfall more than exceeded the weekly requirements during weeks 4, 5 and 6 of bloom, which also illustrates that you cant “irrigate yourself out of stress that occurred earlier in the year”. In normal years, there are several variable that determine the cost of applying 1″/A of water through irrigation, but on average, that cost is around $12-$15/A. Im sure that cost is higher now under current circumstances, but also consider the value of 1 bale/A of cotton that could be lost by failing to irrigate when it is needed. There are several examples of how withholding irrigation during squaring results in no yield penalty, but that is because natural rainfall, albeit small amounts at times, is sufficient for cotton to withstand moisture stress. However, if heat and drought are severe enough to cause wilting, preventative irrigation may be necessary, as severe yield penalties can occur as this article has shown.

The point of all this is to show 1. irrigation during squaring IS needed if excessive heat and drought occurs to the point of wilting, and 2. failing to irrigate properly now can cost you significantly, even though irrigation is properly applied later during the bloom period. If you have irrigation capabilities, be ready to irrigate squaring cotton once the recent rains dry out (if you got some rain last night) or sooner (if you didnt get any rain last night and cotton begins to square). Don’t wait until cotton is severely wilting to make this decision.