Before cotton blooms tarnished plant bugs, or Lygus, damage the crop by feeding in tender terminals and, more commonly, directly on small squares with their needle-like mouthparts, causing the squares to abort. When blooming begins, plant bugs continue to feed not only on the smaller squares, but also on larger squares and even small bolls. Tarnished plant bug feeding on large squares just prior to opening cause“dirty blooms” (white blooms with darkened pollen anthers, and sometimes with small circular deformities on the petals).

Tarnished plant bug feeding on small to medium-sized bolls up to approximately 10 to 12 days old may cause stink-bug-like external boll spotting and internal boll damage, such a callous growth (warts), deformed or rotted fruit, or small boll abortion. This boll damage is identical to that caused by stink bugs. Plant bug damage has become more widespread in recent years, particularly in eastern counties. Plant bugs are capable of causing all of the damage symptoms described in Table 2. 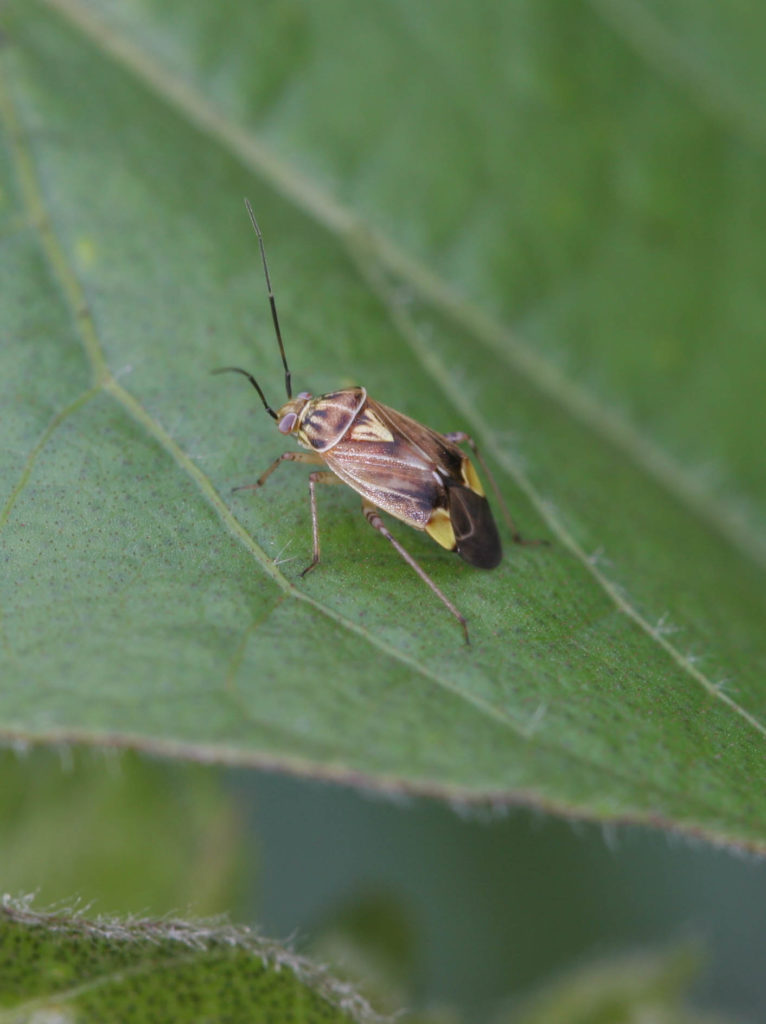 Early season monitoring for tarnished plant bug activity is recommended, especially retention counts of small squares (approximately 1/8 to 3/16 inch long, including bracts). If square retention remains high (greater than or equal to 80 percent), further, more comprehensive sampling for live tarnished plant bugs is probably unnecessary. If retention rates of small, upper, and other first- or second-position squares drop below this level, further sampling for live tarnished plant bugs may be needed. Usually, one terminal square (or its missing position) and one first or second position square (or its missing position) two or three nodes from the top of the plant are inspected per plant from 25 randomly selected plants within a field (50 squares total). Sweep net sampling for tarnished plant bug adults and large nymphs typically involves taking of 25 sweeps at 6 to 10 locations per cotton field.

Be mindful of field edges along ditch banks, adjacent host plants such as weedy flowering fields, or where Irish potatoes or a substantial acreage of corn is present. These areas are often a likely source of migrating adult tarnished plant bugs. In taking samples from randomly selected sweeping sites, pay attention to possible differences in plant bug distributions, particularly changes in levels from the edge to the interior of the field. Significantly higher levels around field perimeters may indicate an invading tarnished plant bug population. Try to initiate samples not less than 50 feet from the field edge, since there are more tarnished plant bugs near field edges and densities are variable. Finally, smaller fields with more “edge” than “interior” are more at risk for infestation than larger fields.

Once blooming has been underway for 1 to 2 weeks, square retention is a less reliable indicator of possible tarnished plant bug feeding, due to natural square loss for mostly weather-related reasons. In blooming cotton, the presence of tarnished plant bugs and their damage is best assessed by continuing fruit examinations, evaluating dirty blooms, and by the use of a black beat sheet (i.e., ground cloth).

During the bloom period, a black beat cloth (also called a ground cloth, drop cloth or shake sheet) is probably the best tool to access live tarnished plant bug levels. The rolled-up cloth is unfurled between two rows to the base of the plants and the cotton plants are firmly beaten onto the area between the rows covered by the cloth. This video below covers the proper use of the black beat cloth. Because tarnished plants bug may be active, they should be counted quickly.

Researchers have found that the small tarnished plant bug nymphs are much easier to identify on a black beat cloth than older standard white beat cloth. Scouts should be aware that tarnished plant bugs may be more common at field edges or in rank areas. These trends should be noted by scouts, as they are sometimes taken into consideration in making treatment decisions. However, this occurrence also points out the need to sample randomly from throughout the cotton field.

*The sweep net threshold may be raised to 10 if fruiting begins on node 4 through 6, or lowered to 6 or 7 if fruiting has begun on node 8 or higher. Thresholds also may be lowered somewhat in stressed cotton.